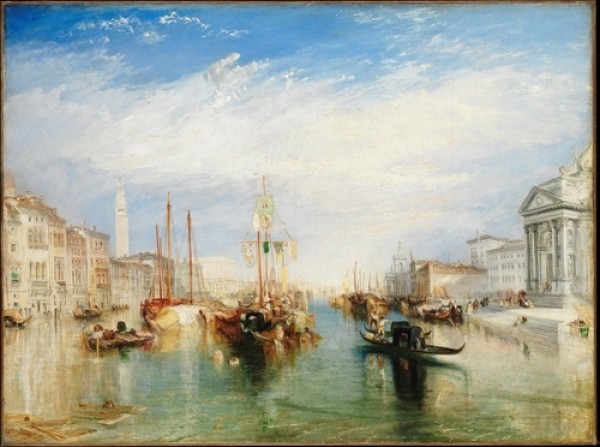 Joseph Mallord William Turner (1775-1851) was an English painter who stood out thanks to his extraordinary watercolour landscapes and oil paintings.

The particular confusion between brilliance and madness was very obvious in the biography of William Turner. An academic painter during his origins, Turner developed his art until reaching a free, atmospheric and in occasions, abstract style that made critics reject his creations until they finally understood he was just a genious.

Many people think he was mad because his mother had passed the last 4 years of her life in a mental hospital, and that could have affected him. Several critics highlight the fact that he had a double life at Chelsea, London, where he spent some years with Sophia Boot telling her that he was a retired Admiral.

The truth is that that “demential chaos” was just an artistical and complex evolution in which the painter proves that he was decades ahead of other artists. This is why many people did not understand him. But now we do. And not only us, decades later William Turner’s paintings were admired by Impressionist artists like Claude Monet and Alfred Sisley, considering him a mentor.

After finishing his studies at the London Royal Academy where he received classes from Sir Josuah Reynolds and Paul Sandby, he decided to travel to many places and keep on learning, especially from Rembrandt, Albert Cuyp and Claudio de Lorena. Many critics say that we can see De Lorena’s footprints in many Turner’s landscapes.

Then, he decided to go to Rome where he painted several landscapes like Modern Rome – Campo Vaccino and Turner’s Ovid Banished From Rome.

After many trips and experiences, Turner’s style turned freer as we can see on his “Norham Castle: Sunrise”. But he went back to Italy, this time to Venice where plenty of critics stress that it was there where he became Great as we can see on his Venice, from the Porch of Madonna della Salute.

On his latest years we can see that his paintings presented many reasons for people to think that he was becoming mad like what we can see on “Sunrise with See Monsters” where it is very difficult to see the monsters themselves as the only predominant thing is the light of the sunrise itself.

In 1851, he became seriously ill and had to leave all his current works. ON the 19th of December 1851 William Turner died at Chelsea, London, and was buried in Saint Paul’s Cathedral. Rest in Peace.