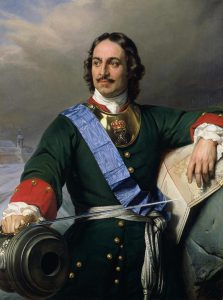 Peter the Great, a portrait made in 1838 / en.wikipedia.org

Russia is a vast area of land occupying most of eastern Europe and much of northern Asia. So little is known about this country that Winston Churchill said of it in 1939 “I cannot forecast to you the action of Russia: it is a riddle wrapped in a mystery inside an enigma.” But we do know that it has boundaries to the north with the Arctic Ocean; to the west with Norway, Finland, Estonia, Latvia, Belarus, the Ukraine (including the Crimean Peninsula) and the Black Sea. Latvia, Estonia, Belarus and the Ukraine were Soviet Republics when the USSR existed (Finland was Russian in the nineteenth century). Russia has borders to the south with Georgia, Azerbaijan,the Caspian Sea, Kazakhstan, China, Mongolia and North Korea. As might be expected, closeness to all these except the Caspian Sea has meant trouble of one kind or another. To the east there are the seas of Okhotsk and Bering.

Swathes of this enormous country have housed settlements founded by Slavs, Turks and Bulgars in the third to the seventh centuries A.D., but the Byzantine Christian Church was also firmly established by the end of the tenth century. Moscow was the centre of political power during the 14th century and later. The Mongol ‘Golden Horde’ (q.v.) was challenged with varying success from 1380. One century later Ivan III known as ‘the Great’ made himself ‘Sovereign of All Russia’, while Ivan IV known as ‘the Terrible’ doubled the size of the Empire between 1533 and 1584, when death stopped him.

Internal disruptions, problems with Poland, disorder among the feudal nobility put the brakes on upward mobility until Peter the Great became Tsar. But it was under Catherine II the Great that Russia for the first time became less of a mystery and much more of a great power, extending territory into south and east Asia.

Russia chose to do battle with the Japanese in 1904/5 and came off worst, but at least the battles brought Russia’s first constitution and parliament, following a minor revolution. Then the Russian Revolution, far from minor as it changed the world’s aspect, ended the Tsarist monarchy in a hail of bullets and the Union of Soviet Socialist Republics was formed in 1920. There were many republics in this union, but Russia was the dominant partner, covering 75% of the Soviet area, and 50% of the total population.

We all know about Hitler’s non-aggression pact with Stalin (q.v.), which might have caused a Nazi victory in the Second World War had Hitler not broken it and invaded Russia. Hitler was not Bonaparte in any sense, and Bonaparte failed in the same attempt. The Union was broken up in 1991 after the fall of the Berlin Wall (q.v.), and Russia became a still colossal independent republic with a seat on the United Nations Security Council.

Since then and to the present day in the Crimea and the Ukraine, relations with former Soviet republics have deteriorated. There were wars in Chechenya (1994), immense troubles in Georgia, and unrest almost everywhere, but the election of ex-KGB boss Vladimir Putin in the year 2000, following reforms made by Kruschev, Gorbachev, Yeltsin and others have improved the economy and asserted an ever-increasing degree of centralization.