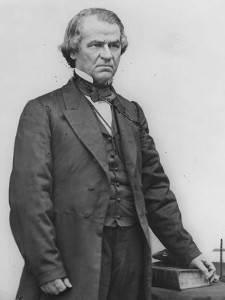 The seventeenth President of the USA has things in common with two others who held the office – Lincoln and Lyndon Baynes Johnson: like Lincoln, Andrew J. was born in a log cabin, but unlike him he never went to school, and was taught to read by his wife. He also shares two coincidences with L.B. – his surname and the fact that both became President because they had been Vice-President when the Number One was asassinated.

Andrew was a spokesman for the poor white farmers of the South, opposed to the slave-owning rancher/farmer aristocracy. He got into the Senate in 1857 when he was forty-nine years old., and soon became unpopular as the only Southern Senator who supported the Union in the American Civil War. From 1862 he was Governor of Tennessee. He was no sooner established in this post than he purged any Confederate supporters he could find – those who supported the Confederate States of America (q.v.) – and managed to keep Tennessee within the Union and with Lincoln. For this in 1864 Lincoln himself supported Johnson’s candidacy for the Vice-Presidency, because, said Lincoln, Johnson could help reconcile North and South when the war stopped. In 1865 an actor killed Lincoln in his box at a theatre and Johnson automatically became President, a Democrat in charge of a Republican administration – a position to which he was eminently unsuited. He showed himself sympathetic only to a white America: “ This is a country for white men,” he declared, and went on, “and by God, as long as I am President, it shall be a government for white men!” Political observers naturally found this statement difficult to swallow when they remembered his speechifying against the slave-owning aristocracy.

Johnson believed, however, in states’ rights, and was opposed to Republicanism. Once the Southern states had stopped having and dealing in slaves, repudiated the Confederate debt and accepted the Union as it was, he felt that they need do no more. Congress, he also thought, had not the right to pass legislation affecting the South unless Southern representatives had a seat there. Obeying his thoughts, he opposed the Reconstruction Act in 1867, but his veto was passed over in both Houses.

Also in 1867 a Tenure of Office Act was passed, which prevented a President from firing senior officials with high office. Johnson thought this was unconstitutional and ignored it. For this he was impeached by the House of Representatives. It is odd, but the case for impeachment was heard in the Senate, where it was beaten by one vote necessary to make a two-thirds majority. Andrew Johnson, the only President who never went to school, did however have one tremendous success; he arranged for the purchase of Alaska.