A History of Poland

Heydrich and the massacre at Lidice

My new wife and I settled into our new home in a country lane at Santa Úrsula on the island of Tenerife in 1980. In a small cottage on the other side of the narrow road there lived a little old woman who kept her garden well and herself to herself. Still, I managed to make friends with her through my wife’s shared interest in flowers. END_OF_DOCUMENT_TOKEN_TO_BE_REPLACED

This treaty has been blamed by many historians as a more than indirect cause of the Second World War. It was supposed to be a treaty made between the Allies and Germany to be signed on 28 June, 1919, but negotiations continued until 1923. Germany however did not take part in the debates aired before the actual signing. Most intelligent Germans therefore thought it was a dictated agreement for peace, which could not be morally binding. END_OF_DOCUMENT_TOKEN_TO_BE_REPLACED

This was a cartel formed by the leading chemical companies in Germany after the First World War. ‘IG Farben’ is the diminutive of the rather more tongue-stretching Interessen Gemeinschaft Farbenindustrie which has been translated as ‘Community of Interests of Dye Industries’. Three of the many companies which joined were BASF, Bayer and Hoechst.

It was by far the largest corporation or cartel in Germany between the two world wars, controlling five hundred companies (in ninety-two countries). Corporative arrangements were made between Farben and Standard Oil (USA), Imperial Chemical Industries (Gt. Britain), and Mitsui (Japan), which makes the period 1929 – 39 so interesting. You may have noticed that the nationality of the first two of these commercial giants formed the major part of the Allies in World War II, while the third joined Hitler’s Axis. END_OF_DOCUMENT_TOKEN_TO_BE_REPLACED

Researchers have tried to find cogent reasons for Hitler’s pathological hatred of the Jews. Nothing in his childhood in Austria happened which might have sown the seeds of that poisonous dislike growing in his innermost soul. His military service during the Great War brought him wounds, but what influence could Jewish people have had on him in the trenches? The enemy was British or French, not Jewish. END_OF_DOCUMENT_TOKEN_TO_BE_REPLACED 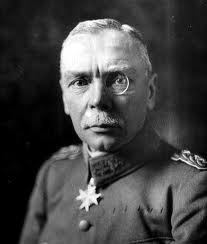 I am not being frivolous. If you were to ask even German or Austrian nationals of below a certain age, say seventy, who Hans von Seeckt was, you might well get a blank expression. But it was Seeckt who prepared and made the German Army of which Hitler was so proud, and which he could use so effectively in France, Holland, Norway, Denmark, Poland etc. in the early years of the Second War. END_OF_DOCUMENT_TOKEN_TO_BE_REPLACED

Eric von Falkenhayn was born in 1861, scion of a typical ‘Junker’ family, which means ‘powerful, noble, landowning, and, not infrequently, bullying and proud as well’. At school he showed intelligence, honesty, self-reliance and bravery, qualities that did not desert him either at military college or later when he was commissioned. END_OF_DOCUMENT_TOKEN_TO_BE_REPLACED

Alexander I, Tsar of Russia

Alexander I, Tsar or Czar of Russia / theesotericcuriosa.blogspot.com

The future Tsar was born in 1777, a son of the supposedly mad Tsar Paul. Contemporary chroniclers have it that young Alexander was implicated in the murder of his father. This may well be so as the boy had been vigorously educated by a Swiss tutor, a great believer in the French idea of Enlightenment – enlightenment often leads to an excessive wish to reform anything and everything. If you have a mad father you may see killing him as a suitable reform in your life. END_OF_DOCUMENT_TOKEN_TO_BE_REPLACED