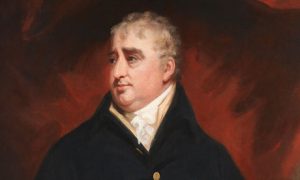 was born in 1749, but his upward mobility was such that he was in Parliament at the age of nineteen. This may have been been because in debating societies at school even the ushers had noted his skill in debate and his accuracy; in class he shone because he could absorb facts and arguments rapidly and store them away in his brain for future use. After Rockingham died in 1782 he became in effect leader of the Whig party.

Almost everybody found him charming and agreeable, and he made many friends, but there was a mutual loathing between him and Lord North, who probably thought him a whippersnapper; George III King of Great Britain, whose illness of porphyria made him quite mad at the most inopportune moments, and William Pitt the Younger, a careful and more astute politician, ten years younger, who was Prime Minister at twenty-four. In the last-named case I think jealousy played a great part in the animosity between two excellent politicians. Nevertheless, making an enemy of a landed aristocrat, a King and a Prime Minister kept Fox out of all the high posts he deserved for all but one and a half years out of the thirty-seven he spent in Parliament. He had no means of controlling his volatile tongue, and no intention of doing so.

He opposed the American War of Independence perhaps because North was running it without much sign of efficiency. But then he surprised everyone by forming a coalition with North in 1783, and became Secretary of State. Together, he and North created the Treaty of Versailles which brought the War of Independence to an end. His Majesty was not amused. In one of his saner moments George III got his revenge for the loss of his thirteen colonies by using his influence in the House of Lords to throw out the Coalition’s Indian Bill. Triumphant, the King then dismissed both North and Fox and installed Pitt as Prime Minister . . . though the latter had no majority in the Commons! Still sane, George quickly called for an election which ended in a majority for the new ministry. A furious Fox became Leader of the Opposition, and stayed in this post for all but the last seven months of his life.

He welcomed the French Revolution as ‘the greatest event that happened in the world’, and divided the Whig party when he opposed war with France. He backed Grey’s proposal for parliamentary reform in 1793. He argued vehemently with Burke (q.v.) over the Revolution, which he still admired. He appeared as Defender of Englishmen’s Liberties by opposing the ‘Gag Acts’ of 1795, which among other things permitted the death penalty to be imposed for attendance of over fifty people at any unofficial meeting. Contemporary writers remembered this because the French Revolution had been based on unofficial meetings of more than fifty people. The Gag Acts also proposed death for anyone who chose to criticise the (unwritten) Constitution.

1797 was a bad year for invasion scares and naval mutinies (q.v.) but Fox supported Grey in his bill for parliamentary reform, which might have destroyed some ‘rotten boroughs’. This again was odd because Charles James was not in any way a democrat, and believed in property qualification for voting. Grey’s bill was rejected, and Fox and his fifty followers left the House and refused to sit return between 1797 and 1801.

Then Pitt resigned because of the failure of his Catholic Emancipation bill, but Fox, who had also backed the bill, decided to come back into the House. By now he thoroughly disapproved of Bonaparte, saying the latter had betrayed the liberal ideas of the French Revolution, and therefore supported resumption of war against France in 1803. One year later Pitt wanted Fox in his cabinet but old friend George III wasn’t having any of that. It was when Pitt died in 1806, exhausted by overwork, to be replaced as Premier by Grenville, that George III lifted his Fox veto, who became Foreign Secretary in a predominantly Whig cabinet. He had time to promote a bill for the abolition of the slave trade (q.v.) before dying, also in 1806. He was fifty-seven.