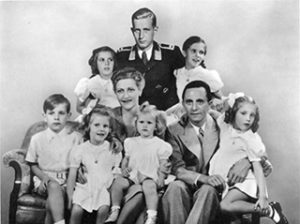 Born into a lower class Rhineland family in 1897, Goebbels was rejected for army service due to a crippled foot condition known as ‘club-foot’. As a child he had had a serious attack of polio which left him affected with a limp. He was by no means the ideal of a typical blond Aryan superman, being short, dark haired, with simian features. Psychologists say that these disadvanatges left him mentally unstable for life, but this is dubious, as he proved to have a sharp brain and a cutting wit.

He was a natural Socialist, hating bourgeois society and capitalists. On joining the National Socialist party he moved directly to the far left, and in 1916 he was made party leader (Gauleiter) in Berlin. Once installed, he organised riots, disturbances and street fights with the skill Germany would soon come to recognise. It was Goebbels who made the Nazis more powerful in Northern Germany.

He soon met Hitler, who promoted him to be director of Propaganda, a newish term in the Nineteen Thirties. Goebbels it was who re-invented as Führer the ex-World War corporal who had won an Iron Cross in the trenches, the supreme leader would, Messiah-like, avenge Germans for the humiliation she had received at the end of the Great War (Treaty of Versailles 1918 – 20 q.v.).

Goebbels persuaded the people that the Führer was infallible and required absolute obedience. He emphasised that anyone doubting Hitler’s world would be severely punished, possibly without the mockery of a trial. His powers of persuasion were so intense, and his technique so modern and effective that Hitler’s victory making him Chancellor in 1933 was largely a result of Goebbels’ manipulation of the masses, aided by the fact that Hitler was, beyond any doubt a hypnotic speaker in public, the larger his audience the better. Goebbels became Minister for Public Enlightenment and Propaganda, which meant he could control communications media, radio, publishing, cinema and the arts. He organised a public burning of books in Berlin on 10 May, 1933, during which thousands of works by Jewish, Marxist and foreign authors were consumed in bonfires. The German people thought all this splendid, though minority groups began leaving Germany for other countries, if circumstances permitted.

He dealt with the press by combining the various agencies into one News Bureau, which he lectured daily, telling them what they should publish. Following the Führer’s lead, he became a tremendous Jew-worrier, and encouraged the ‘Crystal-Night Pogrom’ (Kristallnacht, 9 and 10 November, 1938 q.v.). To suggestions made by other Nazi leaders for an extermination programme for the Jews of Germany and each country that was invaded and occupied, Goebbels reacted with his customary approval – and additional proposals.

By 1943, four years into the Second World War, Goebbels’ power had increased, and Hitler depended on him, Martin Bormann, Heinrich Himmler, Albert Speer and a few others, none of them soldiers. Coming soon after the Allied invasion of Normandy, the Allies’ demand for unconditional surrender was a gift for ‘Dr.’ Goebbels: he used the press and radio to inform exhausted and demoralised Germans that they would become slaves if they lost the war, and must step up conscription (men from 15 to 60 years of age), accept poor conditions, massed aerial bombing, starvation etc., ‘for the Fatherland’. After the failure of the generals’ plot to kill Hitler, in July 1944, the Führer made Goebbels Plenipotentiary for Total War, with extraordinary powers to direct the population. But it was all too late; Hitler was nearly a raving lunatic, dismissing or killing his best military leaders and shutting himself up in a bunker in Berlin, issuing contradictory orders to everyone that they should fight and die rather than surrender. Bormann disappeared; Admiral Doenitz said he was prepared to take on leadership of the government; Goering vanished to his palatial home thirty kilometres north of Berlin; even Himmler thought it was time to give up. Goebbels became Hitler’s most trusted lieutenant; as the Russians approached Berlin from East Prussia, burning, killing and raping, and the United States with its Allies approached from the west and south, Hitler killed himself, his faithful dog and equally faithful new wife Eva. Goebbels accepted the inevitable at last, but not before ordering his wife to kill his six children by poison. He then shot her through the head, while a trusted SS officer did the same to the ‘Doctor’. It was 1 May, 1945.