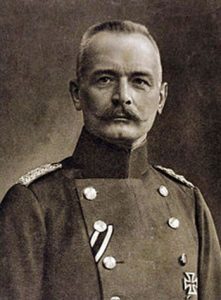 This Junker was born in 1861. As a child at severe schools he was perceived as self-reliant, honest and intelligent. He must have used these talents well because by 1913 he was Minister for War at fifty-two. After von Moltke’s nervous breakdown in November, 1914, he was made Chief of Staff. Using that famous intelligence, he knew at once that the Allies in the Great War had greater resources to call on, and that Germany must win the War quickly, or fail miserably.

He attacked at Ypres, the very hinge of Allied communications, and failed, which brought pessimism. He informed a surprised Chancellor Bethmann-Hollweg that victory in this war would be impossible, unless Russia could somehow be removed from her presence among the Allies. But in 1915 he went to the Eastern front and won a great victory, routing the Russians at Gorlice, forcing them back three hundred miles. Still, he maintained (to a perplexed German public) that ‘victories in the East achieved only at the cost of weakening our position in the west are worthless’.

Remembering Bonaparte’s hapless adventures in Russia, Falkenhayn determined not to permit the loss of his armies in the vast and lethal emptiness of Russia, and stopped the offensive in September, 1915; then, in company with Bulgarian forces he kicked Serbia our of the war at the Danube.

In 1916, at the Battle of Verdun, he was again seeking victory on the Western Front (q.v.). He failed: his losses were catastrophic, as were France’s, and Germany lost the initiative, just when British forces attacked in force on the Somme (July – October, 1916). Von Falkenhayn was dismissed as Chief of Staff in August, but remained in the army. When Romania decided to join the Allies, Falkenhayn was still able to demonstrate brilliance as an army commander, when he routed the Romanians. He died in 1922 at the age of sixty-one.