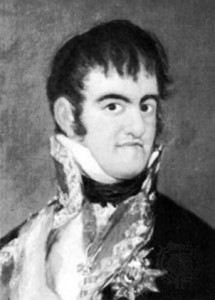 / from a painting by Goya

Ferdinand (Fernando) VII. With a few notable exceptions Spain, like Britain, has not always been fortunate in its kings. Fernando the Seventh of that name stands out as a particularly bad example. He was no good for the Spanish people, and considered the people no good for him. He was born the eldest son of Charles (Carlos) IV and his queen, María Luisa in 1784. At the age of 33 he was plotting against his parents, and was banished for his sins in 1807.

Napoleon Bonaparte invaded and occupied Spain in 1808, despite determined attempts by the people to prevent such a thing. Carlos IV abdicated in favour of his son Fernando, but Bonaparte had been informed about this young man: he brushed the offer aside and installed one of his brothers, 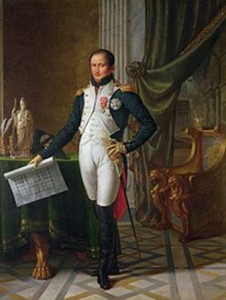 Joseph (José or Pepe) on the Spanish throne instead. Fernando went off angrily to live at the cost of M. Talleyrand at his estate in Valençay in France, where he stayed quite expensively until 1813, when a treaty was signed (actually at Valençay) that restored Fernando to the Spanish throne. Poor Pepe Botella as King Joseph was known by the Spanish, had failed; the French had been driven out by a combined force of Spanish irregulars and a British army led by the Duke of Wellington.

Bonaparte had left his liberal Constitution of Cádiz behind him in 1812, but Fernando rejected it, not being of liberal mien. He instigated a bloody period of counter-revolutionary terror in his own country, perhaps because of bad dreams connected with Louis XVI and Marie Antoinette. Then a new revolution in 1820 obliged Fernando to recognise the 1812 Constitution, but it was not long before the king, aided by treacherous politicians and sections of the French army thoughtfully provided by France, inaugurated a repressive absolutism in 1815 (actually the year of Waterloo).

Fernando unleashed a second Terror on his own population before dying in 1833. Things got no better for the Spanish people even when Fernando ceased to breathe, because the first Carlist War (q.v.) promptly broke out to decide finally (or not) who would succeed him as king of Spain. Fernando was if anything, a worse king then John I of England (1167 – 1216), though this would hardly seem possible.