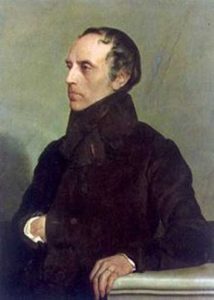 This statesman was born 1787, not a safe time to be born anywhere in France. His father was killed by the guillotine during the Terror (q.v.); somehow François survived to serve Louis XVII after the Bourbon Dynasty (q.v.) was restored. Following the subsequent murder of the Duc de Berry, son of the future Charles X (1820) he lost his position in the Council of State, and went over to the Liberals.

After the July Revolution in 1830 he backed the monarchy of Louis Philippe, and became his ‘Minister of Public Instruction’ whatever that may mean – education perhaps, because he increased the number of primary and secondary schools and also teacher-training colleges. Education in France was neither compulsory or free, but the number of pupils nearly doubled from 1833 to 1847. Perhaps as a reward for this success he became Foreign Minister and for what was left of this reign he was the dominant figure.

He was unpopular and supposedly pro-British, but any friendship for Britain he might have had ended in 1846, when he arranged for one of Louis Philippe’s sons to marry the heiress to the Spanish throne. Now he had to get much closer to Metternich (never an easy task) and the conservative powers in France, who hated liberals and Liberalism: so he remained unpopular. In retrospect, it is difficult to find any time in François Guizot’s life when he was actually liked.

He was one of those politicians who firmly believed in that strange thing the Status Quo, staunchly opposing any bills to extend the vote to a bigger proportion of the rising middle class.In the 1846 election his party won a majority of one hundred, though naturally his enemies claimed the election was corrupt, perhaps because more than two hundred Deputies held official posts. The famous French writer Victor Hugo said of Guizot, “(he is) personally incorruptible, yet he governs by corruption.”

At a banquet attended by many people in government, things got out of hand, with vile accusations and insults hurled above the potage. Crowds gathered outside the banqueting hall and the police stupidly fired live rounds at the people. Louis Philippe dismissed Guizot on 23 February, but though everybody disliked him they knew he was just a scapegoat. Both the King and Guizot shortly vanished into exile. Guizot died at a great age in 1874.