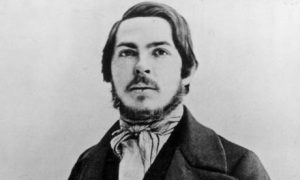 Engels as a young man / theguardian.com

Marx and Engels go together like Marks and Spencer; Karl and Groucho are however better known than Engels, though without him we would probably have had less Marxism, and therefore less Communism. In 1920 Friedrich was born into the family of a very rich owner of factories in the Rhineland. Higher education (universities) not exerting their present-day stranglehold over the young, Friedrich left school at sixteen to work with the family firm. Ar twenty-two this required going to England, where his father’s company had good relations (contracts) with cotton manufacturers in Manchester. Though he was well housed and paid a German-sized wage, he lost no time in observing conditions among lowly workers in middle-Victorian England. Using his contacts with the newspapers he wrote The Condition of the Working Class in England in 1845. Though truthful and accurate, his exposé cannot have pleased his family much.

Engels wrote about the degrading and worsening situation of the working classes and proposed more communal control of management and the means of production. Inevitably, he met Karl Marx in 1845 and thus began a friendship which lasted until the founder of Marxism died thirty-eight years later.

There was a Communist League already in existence in 1847, and together Engels and Marx wrote the Communist Manifesto for it – as a guiding programme for the movement. Finding themselves unpopular, possibly in danger, they went together to Cologne (Köln) where they worked on a revolutionary pamphlet. Then the 1848 Revolutions (q.v.) in Germany broke out, so they rushed off back to England and safety in 1849. 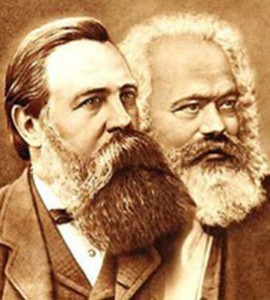 Karl Marx lived in London, where he worked hard on his stirring book Das Kapital; Friedrich continued living in Manchester, and almost certainly paid Karl’s rent and living expenses, as he had no job. Friedrich was a director of the company firm by now, and lived the double life which was to become so popular with Communist leaders later, and right up to the Fall of the Berlin Wall (q.v.). He rode to hounds with the aristocratic classes, with whom he was on first name terms, mixed with the industrial rich, and enjoyed two working class sisters as his girl-friends, though he kept them in separate apartments.

Friedrich Engels was Karl Marx’s principal intellectual and political companion; the former paid the latter’s expenses because he could afford to. In his work Anti-Dühring (1878) he made clear his view of historical materialism. When Marx died (and was buried in Highgate, London) Engels spent much of his time when not in hunting pink on editing and revising the second and third volumes of Marx’s Capital, published in 1885 and 1894. He took an active part in forming the ‘Second International’ in 1889. He was appointed as informal adviser to leaders of the German Social Democratic Party. It is not generally known, and if known not accepted as verifiable, that Engels did more to popularize Marxism than Marx himself. He did this by shaping the way Marx was to be interpreted, offering an easily accessible and simplified version of the great Karl’s thoughts.