Gleichschaltung (coordination by putting in the same gear)

Home/German History, World History/Gleichschaltung (coordination by putting in the same gear)
Previous Next

Gleichschaltung (coordination by putting in the same gear) 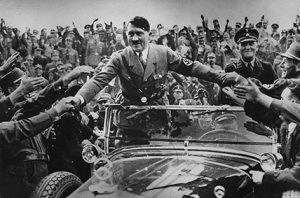 This dubious process began in Germany in February 1933, when civil liberties were suppressed. The newly established Hitler dictatorship meant to rid itself of all independent institutions. In March of the same year The Enabling Act (always a suspicious phrase) made Hitler free of any attempts at restraint by the Reichstag (q.v.). The rights of German separate states (Länder) were removed; eighteen commissioners, members of the National Socialist Party, were put in charge of the Länder; later state parliaments were abolished. The next move was to replace elected bodies by party nominees; in practice the originally sovereign powers of the Länder were transferred to the Reich’s Minister of the Interior. In April, Jews and any others thought politically unreliable, for example non-members of the party were purged, and party members took over their jobs. Hitler was showing his ability to move extraordinarily fast politically, as he would later militarily. In May the Gauleiter of Cologne (Köln) swallowed up all labour unions in the ‘Labour Front’.

While this was happening all independent political parties ceased to exist – the Social Democratic Party and the Nationalists , and the Centre Party in July. The only legal political party left was the Nazi Party. The Federal Council was abolished in 1934, leaving an emasculated Reichstag with only one party in it as all that remained of the Weimar Republic. Speaking politically, it was a series of lightning moves orchestrated by a master mind. Speaking morally, it was the beginning of the end of a civilized world.

Gleichschaltung was found to apply to everyone in Germany; it was impossible to avoid contact with a Party organisation. The only youth organization permitted (and much encouraged) was the Hitler Youth, because Hitler’s plan for Europe and the World included older boys who would become young, fit soldiers accustomed to obeying orders implicitly. At nineteen all youths had to spend six months in the Labour Service, on public works and forced military service. The National Socialists provided organizations for doctors, civil servants, lawyers, university lecturers, students and farmers. Dr. Goebbels and his Reich Chamber of Culture controlled all communications media such as radio, newspapers, cinema and the arts. Hitler made him responsible for acceptance of Gleichschaltung by the German people. Again and again he repeated that it was needed for national unification against the enemies of Germany. It would bind people together, he stressed, overcoming class differences under the guiding hand of the Nazi party – ‘All together in selfless devotion to the Reich!’. It is difficult to believe, but by 1934 only two institutions remained sufficiently independent to be a menace to the Fuhrer: the army, packed with aristocratic officers who stubbornly questioned everything, and the SA, a part of the Nazi party. Both dangers were removed in one lightning move: the ‘Night of the Long Knives’ (q.v.) violently smashed the waning powers of the SA., while the army had to sign a declaration of loyalty to Adolf Hitler if they wished to remain soldiers and alive.

In 1938 Hitler completed his masterwork by purging the German High Command and making himself supreme commander of all armed forces. After this, aristos in uniform kept their opinions to themselves, until the unsuccessful attempt to kill Hitler in July, 1944, which has since been described as a failure. It can hardly be that, as its result was the removal of virtually all Hitler’s best military minds by execution, leaving Germany without leaders to supervise the counter-attack after the Normandy Invasion (q.v.)