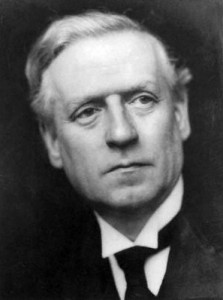 Only Dickens, or perhaps Anthony Trollope, could have invented the name Asquith for one of their novels. It is a respectable surname, but certainly rather odd. Our subject was born in 1852, in the middle of the century that saw Britain’s empire in a state of permanent and very expensive growth, protected by the Royal Navy, with a tiny, young and resolute Queen on the throne. He lived until 1928, when the Great War had almost bankrupted Britain, and the rumour of the break-up of Empire would soon become the shattering noise of World War II.

Herbert was born into wool manufacturing family in Yorkshire. After Eton he took a first-class degree at an Oxford University, was then called to the Bar though he hardly practised as a barrister, and rapidly became a Liberal MP in 1886. He was then thirty-four. He served as Home Secretary under W.E. Gladstone (q.v.) and Lord Rosebery. He differed in his opinion with Henry Campbell-Bannerman, another Liberal leader, by supporting the South African War (end of one century, beginning of the next). Notwithstanding, he accepted the post of Chancellor of the Exchequer from him from 1905 to 1908. He distinguished himself in this period by introducing non-contributory pensions for many financially troubled persons over the age of 70, but balanced this against his raising of the tax on ‘unearned’ income.

Campbell-Bannerman retired for reasons of ill-health and Asquith became PM, with a cabinet intellectually dominated by him. His premiership produced a series of outstanding reforms in the British Isles and abroad. Among the members of his cabinet were such resounding figures as Lloyd George and Winston Churchill, but both these men, who could be curmudgeonly to those they considered inferior, respected Herbert Asquith. Some biographers would say that he would not have noticed anyway, but maybe he did, because he took care to give both key positions.

Above all, Asquith was dynamic, where his predecessor had been soporific in his rhetoric and boringly repetitive. In 1909 he accepted a proposal to unite the Boer States of Transvaal and the Orange Free State with the British colonies of the Cape and Natal to form something brand-new called the Union of South Africa. Meanwhile Churchill was busy at the Board of Trade, inventing the ‘Labour Exchange’, where the unemployed could seek work, and ensuring at least a minimum wage in the ‘sweated labour’ industries.

Lloyd George, not to be outdone in his position as Chancellor of the Exchequer,, also made bold and far-reaching reforms, such as increasing taxation on the rich in his ‘People’s Budget (1909). The money raised went mostly on building Dreadnoughts (q.v. ‘War at Sea‘) though some was used for making ‘social reforms’. But then the House of Lords stepped in, rejecting this ‘New Liberalism’, so Asquith called for a new election (January 1910) which he won with a reduced majority. At this the Lords passed the budget but Asquith was now alerted. He decided to reduce the power of the Upper House, doing it by passing The Parliament Act through in 1911.

Then Lloyd George, eager as ever, pushed through his National Insurance Act (1911), thus providing protection for workers when they were sick or unemployed or both. People began talking seriously about a new thing called the ‘Welfare State’. The National Insurance Act did not hinder the ladies however, and the Suffragette Movement (q.v.) led to violence; at the same time there was an escalation of serious strikes, and even more Ulster resistance to Home Rule for Ireland. Asquith depended on Irish Nationalist support after the elections of 1910, so he introduced a Home Rule Bill that was rejected three times by the Lords between 1912 and 1914: then the outbreak of world war caused its suspension.

Herbert Asquith, as can be seen, had maintained a relaxed attitude to the foibles, pretensions and actions of cabinet members like Lloyd George and Churchill. Perhaps he could foresee both as future great Prime Ministers, but crisis came in the second year of the Great War (1915) when Admiral Fisher, the First Sea Lord resigned after a row with Churchill over the Gallipoli campaign. Supplies of ammunition were not getting through to the Western Front. Asquith decided it was time to fight the war with a Coalition Government formed with the Conservatives, but he did not bother to consult with his colleagues first, producing a massive division in his party. This was worsened by his introduction of conscription in 1916. Young ladies could no longer give white feathers to chaps who did not wish to volunteer, as conscription meant every able-bodied man was forced into uniform.

The Easter Rising in Ireland was savagely suppressed by army and police units (q.v. ‘The Black and Tans’) and then Asquith’s Cabinet colleagues demanded the setting up of a small but special war committee, of which he would not be chairman. Asquith naturally resigned and the Welshman became PM, but without Asquith in his cabinet because he refused to serve under Lloyd George. The Liberals were split, with two leaders: Lloyd George as PM and Asquith as Leader of the Opposition. The end of the Great War came in 1918, and with it an election in which Asquith lost his parliamentary seat, with only twenty-six followers, while the fiery Welshman had 136 supporters. Though Asquith became an MP again in a by-election in 1920, he retired from politics due to illness in 1926.