Home/US History, World History/Immigration to the United States
Previous Next

Immigrants – those who arrive in a new country having left their own:

Emigrants – those who leave their own country to go to another:

Emigration – the act of leaving one’s country to start a new life in another:

Immigration – the noun that describes the action of immigrants: 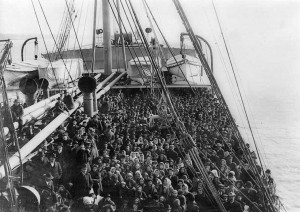 This brief lesson in English vocabulary is essential before starting an article about immigration or emigration. Television news programmesand the rest of the media continuously mix up the words which makes for confusion.

Between the years 1815 and 1914 occurred the largest peaceful migration (oh dear) recorded in history, when over thirty million emigrants left their own countries for the United States of America. When they arrived they became immigrants. Five million of them got there between 1815 and 1860 (more than the entire American population in 1790): another twenty-six million between 1865 and 1914. Until the 1880s almost all immigrants came for north and west Europe, but mostly from Britain, Ireland and Germany, which is why there are several very ‘Briddish’ cities on the eastern seaboard, many ‘Oirish’ cities in the hinterland, and at least one almost totally ‘German’ city – Pittsburg.

The emigrants left because of a tremendous rise in population figures in Europe with the resultant lack of jobs; because of natural disasters like drought and famine, such as the Irish Famine in which a million people died and another million emigrated; because of religious pressures; and because the United States seemed to many a paradise on earth just the other side of the Atlantic (or the Pacific). The States attracted so many millions of dissatisfied people as it needed workers for the burgeoning industries, and because vast new lands were being opened up in the west, much helped by the transcontinental railroads.

After 1880 few German and English immigrants arrived, because the European industrial revolution was providing much more work at home. In 1914, the first year of the Great War, 85% of immigrants came from south and eastern Europe, especially Italy, the collapsing Austro-Hungarian Empire and Russia. On the other side of the country California saw the arrival of multitudes of Chinese and Japanese.

Most immigrants headed for towns in the north and east, where industrialization was growing. Not enough houses were built, and many left comparatively good housing in their home country to live in slums. By 1910 two-thirds of the population of the twelve largest cities were immigrants or the children of immigrants. Extraordinary facts began to emerge; New York City had more Italians in it than in Naples: there were twice as many Irish there as in Dublin – and more Jews than in all Europe!

Naturally this enormous entry of foreign immigrants created tension in American society. Until 1830 the population was virtually all of the Protestant persuasion, but by 1860 this had changed; three million Catholics from Ireland, Poland and Germany had brought about the change. Many immigrants arrived illiterate and innumerate, and were blamed by society for increases in crime. This particularly applied to people who had emigrated from Italy, as they brought their Camorra with them, and had had no compulsory education. Congress decided to restrict immigration, in a notoriously obnoxious way: no Chinese after 1882 and no Japanese after 1907. In 1912 the Quota Act permitted entry to only three percent of the numbers of each nation listed in the Census of 1910, which gave preference only to emigrants from Western Europe. From 1917 immigrants were required to pass a literacy test. Only 150,000 were to be allowed entry per year.

When the Great Depression arrived, a marked drop in immigrants applying for residency was noted. Only half a million came in the 1930s, the lowest total for over a hundred years, and half of these were refugees escaping from Nazi-occupied Europe. Among them were eminent writers, film, ballet and opera directors and others from the European world of culture. George Sanders, a film actor who was even more English (apparently) than David Niven (who was Scottish), was not English at all – he was a Latvian born in St. Petersburg. Albert Einstein emigrated to the States and was admitted, as was Thomas Mann the writer and his younger brother, known as The Subordinate Klaus. Sam Goldwyn was a Polish Jew called Samuel Goldfish; luckily he changed his name or we might have had a film studio called Metro-Goldfish-Mayer. Michael Curtiz was an excellent film director who never learnt proper English and forgot all his Hungarian.