Home/English History, World History/Jack The Ripper and the British Royal Family
Previous Next

The name describes the pseudonymous murderer of at least seven women, all of them prostitutes, in or near the poor district of Whitechapel in London from August 7 to November 10, 1888. The identity of Jack the Ripper has never been truly established, though many candidates have been put forward by eminent writers, criminologists and cranks. Many novelised versions have been written and published. Many film stories have been made and distributed – some with notable success.

All but one of the Ripper’s victims were killed while ‘on business’ in the streets. The police and the judicial authorities call this ‘soliciting’, or ‘soliciting for immoral purposes’. In each instance, the victim’s throat was cut, and the body mutilated in such a way that officials recognised that the murderer had a good knowledge of human anatomy.

After one of the murders, half a human kidney was sent in a package to the Metropolitan Police. The police also received a number of provocative and taunting letters from someone signing himself ‘Jack’ or ‘Jack the Ripper’. Because of these letters, which were allowed to be published by the gutter press, the authorities made strong efforts to establish the identity of the murderer, who could be called the first serious ‘serial assassin’.

Such was the uproar among the general public and the terrified women of London when the police could not identify the killer that the Government of the time was said to be ‘tottering’ on the brink of a General Election in which it was claimed it would fall. The police commissioner resigned, and so did the Home Secretary.

It is established that from August to November, 1888, London’s East End was terrorized by Jack the Ripper. The motivation of each murder of the prostitutes was clearly sexual. All the victims were professional prostitutes. Each woman was first strangled from behind. Then the throat was slit from ear to ear, left to right, with an instrument obviously designed for surgical operation.
The Ripper then proceeded to eviscerate each victim as if they were bodies on a slab in a
morgue, subject to the attentions of a forensic surgeon. The police reached the conclusion that the assassin was sexually obsessed, but incapable of sex itself. It seemed as if his actions were a terrible from of defloration, or the taking of virginity.

Now we deal with the contentious subject of the murderer’s identity. The short answer is that no-one knows. Hundreds of conclusions have been reached, and accusations levelled, including ones as ludicrous as the popular idea in 1888 – that the assassin was a gorilla who climbed impossible walls, and hid his knife (!) in the branches of the very few nearby trees (the East End of London was not noted for its tree population). Then there was the idea put forward by a Sunday newspaper that the assassin had had his penis removed in an operation, and therefore sought to gain revenge! Another theory said that the murderer was a sufferer from syphilis, who expected the blood from murdered prostitutes to ‘heal his sores’. Chief Inspector Abberline, in charge of the case, said – “We were almost lost in theories; there were so many of them.”

In 1970, professor Stowell’s famous article on the identity of Jack the Ripper was published in the Criminologist. The suspect is clearly Prince Albert Victor, Duke of Clarence and Avondale, Queen Victoria’s grandson, Heir Presumptive to the British throne and 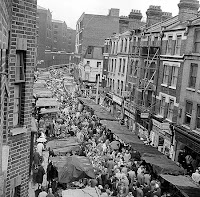 future King-Emperor. 85-year old Dr Stowell had been convinced of Prince Albert Victor’s guilt for more than half a century. He had kept the evidence to himself, he said, ‘for fear of involving, as witnesses, some close friends who were still alive’. His theory was that the Prince of Wales’ eldest son – Albert Victor – had committed the murders during fits of insanity brought on by an advanced case of syphilis. Albert Victor died at the age of 28 in 1892, not, as generally believed, of pneumonia, but (Dr Stowell claims) due to a ‘softening of the brain’ induced by the disease. Stowell says his theory comes from extensive studies of the papers left by Queen Victoria’s physician, Sir William Gull.

Stowell’s sensational insinuation, that the Ripper had been Queen Victoria’s grandson (eldest son of the then future Edward VII), was seen by the royal family as ‘too ridiculous for comment’ and a ‘mischievous calumny’. A spokesman said that the Prince had anyway been in Scotland, before many witnesses, on the occasions of at least two of the murders. Dr Stowell immediately wrote to The Times denying that he had ever implied that Albert Victor was the mass-murderer.
In November 1970 Dr Stowell died suddenly. His son, Dr T Eldon Stowell, interviewed by a squadron of hysterical reporters, claimed that all his father’s papers on the subject of Jack the Ripper had been destroyed immediately after his death. ‘My family decided that this was the right thing to do. I am not prepared to discuss our reasons for doing so.’ But the international press carried more than 3000 stories concerning Dr Stowell’s dramatic unmasking of Prince Albert Victor. As you can imagine, once the press had got this juicy morsel in its maw, it intended to keep on chewing on it – and indeed the press still carries stories which claim that Victoria’s grandson, the Duke of Clarence (presumably because he was a royal duke and a great-uncle of Queen Elizabeth II) had in fact been Jack the Ripper.

Since then two more possible candidates have been pilloried in books, articles, TV programmes and magazines. One is the great artist J.S. Lowrie, whose furious (surviving) family took the authors of the accusing book to court and won their case . . . and the other was Sir William Gull himself, accused in at least two Hollywood-based films of having been Jack the Ripper, one assumes because he was a physician, and owned all the sharp instruments necessary for such surgically-perfect ‘operations’ to be performed at dead of night, in the dark, on the deserted streets of Whitechapel (Image).