Nuri as Said, and what Iraq might have been

Home/History/Nuri as Said, and what Iraq might have been
Previous Next

Nuri as Said, and what Iraq might have been 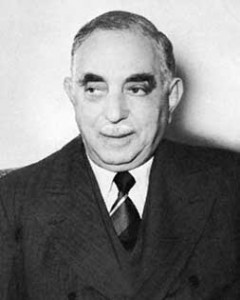 Nuri as Said, and what Iraq might have been. Though we think of Iraq as a Middle Eastern country, it is really West Asian, bordering on Turkey to the north, Iran on the east, Syria and Jordan to the west, and Saudi Arabia and Kuwait to the south. This land used to be known as Mesopotamia, and was the site of very early civilizations. It was actually called ‘The Cradle of Civilization’, but later in the seventh century after Christ it became a Muslim state after invasion from Arabia. Then the Ottoman Empire grabbed it in the sixteenth century and Turkish it remained until 1914/15 when British forces drove the Turks out.

After the Mesopotamian Campaign the country was occupied by Britain, granted responsibility under a League of Nations mandate (1920 – 32). In 1921 Amir Ahd Allah Faisal became King Faisal of Iraq, and British influence was strong, especially under the premiership of Nuri as Said (1888 – 1958). His was the last effective and sensible rule in that sad country.

Said set up the Iraq Development Board, using ever growing oil revenues for positive and constructive purposes. There were no collections of dozens of Rolls-Royce motor cars kept in specially designed hangars. Instead good roads and bridges were built, electricity and proper sewage disposal came to the villages, fresh water pipes were laid, schools, colleges and hospitals founded and financed. The beginnings of heavy industry were created. Iraq might by now have been among the richest and perhaps even happiest nations in the world, but by 1957 the pot was being stirred, as always happens, by revolutionaries.

Nuri said in 1957 that Iraq was not a real country at all; that it was an artificial creation, put together by Britain as an emergency measure; that it could not be managed by constitutional means, kindness and British-style laws. It required a tough approach, and resolute leadership, which the British disapproved. That disaster was imminent, and could not be reversed. The British Embassy declined to take any notice.

In 1958 Uri as Said, King Faisal and most of the royal family, Said’s cabinet of ministers and advisers were machine-gunned by military revolutionaries, a group which included the young Saddam Hussein. This was the beginning of Iraq’s long and apparently interminable martyrdom, still continuing today, even after the hanging of Saddam. If Nuri as Said had been allowed to finish what he started, there would have been no Iraq/Iran War, no Bush/Saddam wars, and the ancient Mesopotamian coastline might have been a favourite Riviera. But Life, and Politics, are not like that.