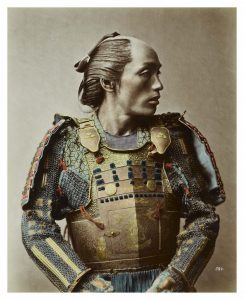 Samurai. This was the Japanese equivalent of the barons of England, feudal aristocrats in France and regional princes in Germany, who ruled the country while representing their king or emperor. They were the ruling caste by the 12th century. One century before these great Japanese warrior families were taking over power from the Emperor however. Towards the end of the 1180s, the victor of most of the battles, one Minamoto Yoritomo was given the special title of Shogun (emperor’s personal deputy) after his ending of the struggle between the Minamoto and Tairo families.

Minamoto ostensibly became the servant of the Emperor, and was able to exercise power in his name, but Japan knew that it was Minamoto who held the real power, while the Emperor was little more than a figurehead. It is safe to state that from this time forward, to the Meiji Restoration (q.v.) of 1868 the rulers of Japan were military champions. They had their own code of conduct, known as Bushido which means ‘the way of a warrior’, stressing the virtues of bravery, loyalty and honour. The word samurai itself means warrior and each samurai’s loyalty was toward his lord, whose honour it was his duty to defend. If he behaved badly, was defeated but survived, he was expected to die by suppuku. He must slice his own belly laterally, with a loyal friend waiting with a sharp sword to cut off his head. The word suppuku means belly-cutting.

By the 16th century a rigid caste-system had been imposed upon the Japanese, divided into four groups, with the samurai head of the list, followed, interestingly enough in this order – by peasants, artisans and finally merchants. The samurai had nothing but contempt for merchants, important only for money-grubbing and commerce. From 1603 to 1867 the Tokugawa Shogunate brought peace and discipline to Japan. The samurai lords were not needed as warriors and were thus able to stay on their estates and make them prosper, though their retained their bushido code.

In another article the Meiji Restoration is fully explained. The four-caste system was abolished in 1871, not without rebellions from the samurai, the most serious of which was the Satsuma Rebellion of 1876 (q.v.). The Second World War produced a seriously bad reputation for bushido, as many of the P.O.W camp atrocities were carried out under that name and code.