Sir Oswald Mosley and the Blackshirts

Sir Oswald Mosley and the Blackshirts 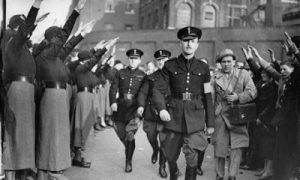 Oswald Ernald Mosley was born in 1896 into a family with a baronetcy. He came from ‘the ruling classes’ and later used his knightly title and high connections as a political tool. He entered the game as a Conservative Member of Parliament in 1918 after serving in the Great War, became an Independent in 1922 and crossed the floor in 1924 to join the British Labour Party, not without some risible comment from members of that rising party.

He joined Ramsay Macdonald’s government in 1929, heavily under the influence of the writings of John Maynard Keynes. He thought, for example, that one could reduce unemployment by restricting foreign imports, making purchasing power more elastic, and relying on the nation’s banks to finance industrial development. These plans may have made sense but they were rejected. so he resigned in 1930 to set up his own ‘New Party’. Mosley had not failed to note the rapid upward mobility of a Bavarian ex-corporal called Hitler in the floundering, nearly starving Germany of the early Thirties. Then there was an election and all the New Party’s candidates including Mosley himself lost their deposits dreaming in vain of parliamentary seats.

Oswald Mosley went to Italy, where an ex-journalist and editor with deep illusions called Mussolini impressed Mosley so much he went home and dissolved the New Party, replacing it with his own British Union of Fascists (BUF), naturally inspired by the Italian dictator. The Union was organised on basically military lines, found no difficulty in attracting young, strong and potentially violent men into its growing ranks. One simply had to be physically very fit, loyal to the Leader (Mosley), and wish to change the entire British system of living, working, and spending your spare time. You also got issued with a smart black shirt, often worn with knee-exposing shorts. The famous writer P.G.Wodehouse ridiculed the Blackshirts in his Jeeves novels. But Sir Oswald, not at all put off, married a society heroine called Diana, one of the ‘Mitford Girls’, all of whom were a great worry to their parents Lord and Lady Redesdale. The beautiful Diana became Lady Mosley, an action for which she would suffer a great deal later.

At Mosley’s meetings hecklers were silenced by the Blackshirts, who were violent in an excessively violent decade which would end with the Second World War. His backers came mostly from the working class, who were indeed out of work and downtrodden in those days, plus not a few landowners and aristocrats. The Prince of Wales, David, cheered Mosley on, when not dating an American lady from Baltimore called Wallis. P.G. Wodehouse and other eminent authors continued to treat Mosley and his blackshirts as a very funny joke.

Members of Parliament, however, were not amused so they passed The Public Order Act, a serious blow to the BUF because it prohibited political uniforms of any kind (or colour). The British people, sickened by an approaching war with Hitler, associated Mosley directly with Nazism and ceased laughing with Wodehouse. Winston Churchill had Mosley arrested with his wife after the War started and they were imprisoned in separate jails and not treated as gentlefolk by resolute male or female warders. Nancy Mitford, Diana’s sister, praised Winston for his decision, adding that Diana was ‘obviously a traitor’. But a younger sister, briefly in love with Hitler in Germany in 1934, shot herself (though not fatally) when the War was declared. The Redesdales were desperate, and then their only son Tom went off to fight in Burma where he was killed.

The Mosleys were jailed from 1940 to 1943, and under house arrest until the end of the War. After the peace proceedings were terminated to nobody’s satisfaction, Oswald Mosley, a free but disliked man started the Union movement, which was in favour of the idea of European unity, a long time before this became a reality. He was not successful as an MP, remained in love with his wife, and lived mostly abroad. He died in 1980, much mourned by his Diana and their children.