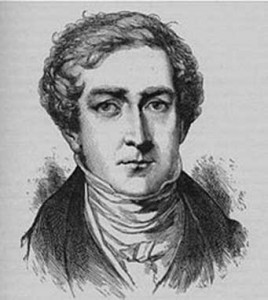 He was a Lancashireman, son of a rich industrialist. Born in the eighteenth century (1778) he got into Parliament as a Tory at twenty-one years of age. By 1812 he was in Lord Liverpool’s cabinet as Secretary for Ireland, when he was twenty-four. Looking back through history at the misadventures of Englishmen trying to administrate Ireland, one would know that Robert Peel could not treat his job as a sinecure.

Between 1822 and 1827, and 1828 to 1830 he was Home Secretary – the second period under the Duke of Wellington’s premiership. He was never an expert ‘speechifier’, not in any way an orator like Palmerston or George Canning, but simply efficient, mastering details rapidly. He proceeded with unexpected reforms of the legal system, removing obsolete laws, and taking the death penalty off at least one hundred offences. Do not forget that in England even a hungry youth could be hanged for stealing a load of bread.

In 1829 Robert Peel set up the first truly organized, disciplined and uniformed police force in Europe – the Metropolitan Police Force. Other countries were soon to copy the concept. Among the many nicknames he earned during a long career, the word ‘Peeler’, meaning uniformed policeman, remains to this day. But he was also called ‘Orange Peel’, for supporting, as a good Protestant, the Orange Order in Ireland. Indeed his protestantism was so strong that when Canning, a Roman Catholic became Prime Minister in 1827 he resigned. Canning was known to back the movement for Catholic Emancipation.

When Canning died Peel was sure that, given O’Connell’s success in the Clare election, there would be civil war in Ireland unless emancipation was granted, so to the surprise of many he pushed the Emancipation Bill through the Commons. Many Tories found this treacherous. He opposed a Reform Bill of 1832, but his intelligence told him that the Tories would find themselves in permanent opposition if they opposed all change. Becoming Prime Minister, albeit briefly in 1834 he set up the Ecclesiastical Commission, by far the most important measure affecting the Anglican Church in the 19th century, because it allowed the Church to reform itself.

The Election of 1841 showed that an organised and wise opposition can upset the established government. It gave Peel a majority of over seventy seats, and started a ten-year period in which he was politically dominant. He started by reforming the financial system, unpopularly introducing income tax – but then he could balance things by reducing the tax on consumer goods, a benefit to all. Most of today’s financial ministers could learn a lot from Robert Peel.

1842 saw Lord Ashley’s Bill forbidding the employment of women, and children under ten in coal mines. Ashley would later become Lord Shaftesbury. In 1844 Peel’s Home Secretary limited the hours women and children could work in factory or field. The Bank Charter Act of 1844 continued financial reform by linking the power to issue banknotes to the gold reserves. This formed the basis of currency policy for the following eight decades. Peel’s budget of 1845 embraced further tariff reducations. Over half the duties were abolished completely. BUT, in the midst of all this success, the Irish Problem loomed again.

Peel had reacted to O’Connell’s movement to repeal the Act of Union by stopping a political meeting at Clontarf in 1843, but he said at the time that ‘mere force will do nothing as a permanent remedy for the social evils of that country . . .’ Wanting to improve relations between his Government and the Catholic middle class in Ireland he proposed that a certain grant to a Catholic seminary at Maynooth (agreed to in 1795) should now be trebled. A great storm of protest from the Anglican Church, dissenters and Tory MPS meant that he had to get Whig support to pass his bill. The Maynooth Bill split the Conservative party (159 for; 147 against). Then Peel, gritting his teeth, proposed to repeal the Corn Laws. There was famine in Ireland, and again Peel needed support from the Whigs, which he got, but only a third of Conservatives voted for repeal. Many Tories now thought of Peel as a traitor. They joined with the ‘whiter than snow’ Whigs to bring down Peel’s government. As a result Britain was governed by the Whigs (Liberals) for forty years.

In Opposition Robert Peel’s prestige was so great that even the Whigs consulted him on the quiet, but he enjoyed the approval of Queen Victoria, who found him ‘middle-class’ (which he was) in a most disturbing way. Riding in Rotten Row in 1850 he had an accident and died. With Pitt and Gladstone, possibly Palmerston as well, he was one of the really great Prime Ministers of the nineteenth century, giving the Conservative Party an ample base for support by appealing to the business community instead of the more traditional landed classes and the Church. When Disraeli later became PM it was ‘Peelite’ policies that he followed.