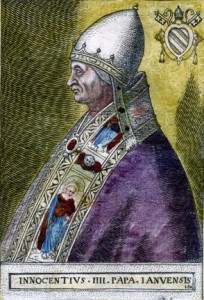 This Innocent excommunicated the awful King John of England, who had refused to recognise the Pope’s appointment of Stephen Langton as Archbishop of Canterbury. He also set up the Fourth Lateran Council in the year 1215.

Innocent IV (Sinibaldo Fieschi) became Pope in 1243 and reigned until 1254. He was Genoese Italian by birth and similar to Innocent III in that he believed in papal supremacy above all. Through the exercise of patronage he organised the construction of his own power network, and was not known for his scruples. It was this Innocent who exacerbated the struggle between the papacy and the Emperor Frederick II. When the latter died (1250) he sought to establish supreme papal powers in Sicily. His (illegitimate) son Manfredo led a revolt against papa in 1254, when he was busy setting up a branch of the Holy Inquisition on a permanent basis in Italy.

Innocent X (Giambattista Pamfill) was Pope from 1644 to 1655. If Innocent IV was not known for his attention to scruple, this Innocent was simply unscrupulous, particultarly notorious for nepotism. When elected and safely enthroned he began a series of attacks on the Barbarini family, who had supplied his predecessor, Urban VIII. The Barbarinis ran off to France to escape his clutches; once in France they appealed to the super-powerful Cardinal Mazarin for protection. Mazarin saw the sense in this and threatened to annex the papal enclave at Avignon. This Innocent also saw sense and backed down.

Innocent XI (Benedetto Odescalchi) was an Italian pope elected despite the opposition of King Louis XIV of France. He had to take over a bankrupt treasury and an inept administration, which he sought to solve by removing many sinecures and making a determined assault on luxury. He also tried, with limited success, to remove the practice of nepotism. He was adept at extracting money from great Catholic princes, and such was his success that he was soon able to aid John III Sobieski of Poland and Holy Roman Emperor (q.v.) Leopold I in their breaking of the Ottoman siege of Vienna in 1683.

He was not, however, at all fortunate in his relations with the ‘Sun King’, who had tried to stop his becoming pope. He practically never had any money, partly because of Louis’ habit of seizing revenues from vacant French sees. Matters came to a head when the French King summoned a synod which fiercely affirmed limitations of papal authority within France. Innocent XI responded by refusing to confirm the promotion of any French clergy connected with the synod.

In 1685 this Pope made Louis even angrier when he (Innocent) condemned the king’s treatment of the French Protestants (Huguenots). He then added insult to injury by opposing Louis’ candidate for the archbishopric of Cologne. Louis became out of patience and promptly occupied the papal enclave at Avignon.

Innocent XII (Antonio Pignatelli) became Pope in 1691; born in 1615 he was therefore seventy-six. He was educated by the Jesuits, and had been papal ambassador to Austria, Tuscany and Poland before getting his cardinal’s hat. His triumph was the engineering of an end to problems between the papacy and Louis XIV – no easy task. He achieved it by getting Louis to withdraw the Gallican Articles of 1682 and take the French army out of Avignon. Grateful to the French monarch, this Innocent championed the candidacy of Philippe of Anjou (Louis’ grandson) as heir to the Spanish throne. Innocent also acknowledged Louis’ right to ‘administer’ vacant sees. Unlike Innocent XI, he condemned Jansenism; he continued the battle against nepotism, attacking the practice in his Bull Romanum decet pontificem. He died full of years in 1700.

Innocent XIII (Michelangelo dei Conti) was born in 1655 and became Pope in 1721. The last of our all-Italian popes, he had been papal ambassador to Switzerland and Portugal, and became cardinal in 1706. In his first year as pope he invested Holy Roman Emperor Charles VI with sovereignty over Naples. Continuing his policy of interfering with the affairs of other nations, he recognised James Francis Edward Stuart, a.k.a. the Old Pretender as King of England (there was a Hanovarian king on the English throne at the time) and promised the Royal Scot money if he brought Britain back to the Roman Church. Like Innocent XII he despised Jansenism in his Bull Unigenitus in 1722. Unlike him, this Innocent disliked Jesuits, taking them to task over the modified ‘Chinese rites’, supposedly used with some success to attract converts in Asia.