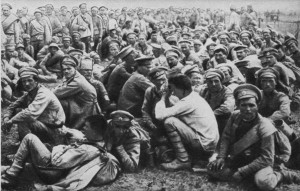 The battle of Tannenberg. In one of the better Hollywood attempts to re-produce the Second War on celluloid, The Night of the Generals had Peter O’Toole at his best playing a German general called ‘Tannenberg’ who mixes winning war strategies with a double life as a serial murderer. The name is well-chosen: Tannenberg (26 – 29 August, 1914) had the fresh German armies defeating numerically superior Russian soldiers at the beginning of the Great War.

Germany’s eastern frontiers had been lightly guarded to agree with the Schliefen Plan (q.v.), which aimed at demolishing France before turning on Russia. But the Russians were (and are) wily, and before German mobilization could be completed, two Russian armies, led respectively by Rennenkampf and Samsonov, invaded East Prussia without warning. But the Russians enjoyed little or no co-operation between themselves, essential in all-out war, and the two enormous forces were too far from each other in the event of a German counter-attack. The Germans were commanded by a fellow who wanted to retire to the river Vistula, with the viable excuse that his army was smaller than either of the Russian armies. He was promptly replaced by Hindenburg (q.v.) who had been ‘released’ from well-deserved retirement, backed up by Ludendorff (q.v.). 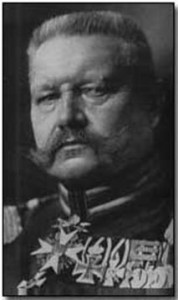 These two masters of military strategy agreed that a plan drawn up by a Colonel Hoffmann (chief of operations) was good enough to adopt; it required a concentration on Samsonov in the south. Though it is difficult to believe, the latter’s messages, giving away both his intentions and his exact position, were not sent in code. The Germans surrounded Samsonov and his Second Army which lost 125,000 men killed or captured, plus 500 guns. Samsonov knew what to do; he committed suicide.

Had Rennenkampf (not a very Russian name) known better what was happening, he could have attacked while all German forces were concentrated in the south, and swift action might have brought the War to an end. But he did not: Hindenburg moved like lightning to attack the Russian First Army near the Masurian Lakes. A Russian counter-attack permitted Rennkampf to withdraw across the Niemen river, though another 125,000 men were lost. German overall casualties were less than 20,000 in both battles.

The victories made Hindenburg a hero in Germany and gave his country dominance on the Eastern Front which she would not lose throughout the Great War. The Allies on the Western Front meanwhile were greatly helped as the new German Chief-of-Staff, Moltke, had to withdraw troops from the armies in France at a most critical time in order to save what could be saved in East Prussia. As it was they arrived too late to fight at what became known jointly as the Battle of Tannenberg, but their removal from France helped Joffre stop the German advance towards Paris, thus depriving Germany of a rapid victory.