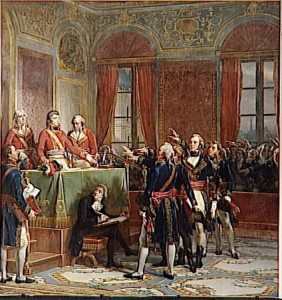 Bonaparte is welcomed as First Consul

The Consulate. In this piece I am not writing about consulates – which are offices maintained by countries in other countries, where business is done and, occasionally, the officials manage to help a fellow countryman in trouble. That is the chief difference between embassies and consulates, the ambassador and his staff represent their country at the highest level in the corridors of power of the host state, whereas in the average consulate the consul and vice-consul are there to maintain the best possible relations between their country’s industries and those of the host country. There is another big difference too: an embassy is semi-sacred ground, a tiny piece of real estate belonging to the guest ambassador’s state – which is why refugees sometimes seek asylum there.

From 1799 – 1804 the Consulate was the name given in France to that period between the coup d’état of Brumaire, after which Napoleon Bonaparte became First Consul, and his making himself Emperor. It was during this Consulate that Bonaparte made most of his domestic reforms. France was at peace (except with England naturally) during this period. The Constitution of 1799 brought him total control of the government, as he was First Consul (a rank harking back to imperial Roman times), and as such could appoint ministers and other officials of the state; they were responsible directly to him, and not to the elected assemblies, which shows how even revolutionary powers can be waned by a determined personality.

Bonaparte managed to keep a respectable-looking democracy in place, with a Tribunate to discuss legislation and the making of it, and a Legislature to vote on it – but no one doubted that all real power was in the Corsican’s hands: legislation, for instance, had to be proposed by the Council of State, which not by coincidence was hand-picked by him. He also organized the Treaty of Amiens in 1802, through which he was at peace with the English for a moment. Meanwhile he used his powers to achieve ambitious reform, which continued to affect France right through the 19th century. As First Consul (I do not think there was a Second, or a Third) he dismissed elected councils established during the Revolution (q.v.), and centralized a system which was more authoritarian than the now extinct Monarchy. He appointed Prefects to supervise all local government; these appointed mayors in the ‘communes’. His ‘Code Napoleon’ unified the multiple laws in France into one system, and did a deal with the Pope producing the Concordat of 1801 thus ensuring the support of French Catholics. He also set up a form of military grammar school system which would turn out civil servants and army officers: these were called lycées. Strangely enough, both the discipline and the curriculum were a surprise, as they were old-fashioned, even archaic, odd for a country that had gone through horrible years of a ‘liberalized’ revolution against old-fashioned values. Even more strangely Napoleon re-introduced the first steps in recreating an aristocracy, which most liberals thought had lost everything on the guillotine. To cap it all, he thought up the ‘Legion of Honour’ an honour not kept only for French people, but for foreigners as well. It began as a means of rewarding his senior army officers, but was later extended to all the professions, including writing and acting.