The demise of the Church of England

Home/History/The demise of the Church of England
Previous Next

The demise of the Church of England 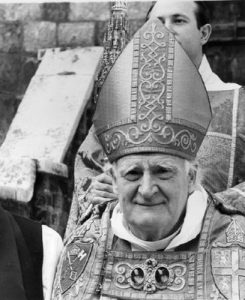 A distinguished elderly gentleman on a professional foreign tour, lay on his hotel bed waiting for news of a cancelled flight. His press secretary found him there, hands clasped behind his white head. He was repeating the words, “I hate the Church of England.” The secretary commented, “ It’s a good thing nobody’s here but me to hear you say that!” Dr. Ramsey, for it was he, said again, “Oh, but it’s true. I do hate the Church of England. Indeed I do.”

Ramsey was Archbishop of Canterbury at the time. At the time of his enthronement at Canterbury, he said, “Here in England, the Church and State are linked together . . . We ask for a greater freedom in the ordering and in the urgent revising of our forms of worship . . . If the link of Church and State were broken, it would not be we who ask for this freedom who broke it, but those – if there be such – who denied that freedom to us.”

The Reformation that took place in sixteenth century England was the process by which an English Church rejected the authority of the Pope and the Catholic Church’s established doctrine and liturgy. At the same time it was the means by which Chancellor Thomas Cromwell, urged on by Henry VIII, sequestered Church lands and property ready for ‘redistribution’ to the Crown and those at Court who wished to buy it cheaply. Henry became Head of the Church of England (though he never stopped being a Catholic) and the ancient authority at Canterbury continued under the same name.

When Queen Elizabeth II was crowned at Westminster Abbey Ramsey had been beside her when she was annointed by the Archbishop, Ramsey’s former headmaster Dr. Fisher. One should not be surprised to learn that Fisher had told the Prime Minister when the time came for his retiremen that he could not recommend his former pupil for the job. Harold Macmillan replied, “Well, Archbishop, you may have been Michael Ramsey’s headmaster, but you are not mine (Fisher had been Head Man at Repton; Macmillan a boy at Eton) and I intend to appoint Dr. Ramsey. Good afternoon.” 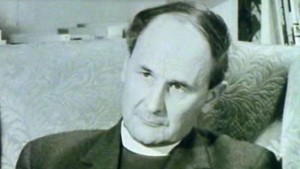 In the early 1960s the Bishop of Woolwich, Dr. J.A. Robinson, was apparently a real Church of England man, son of a famous theologian, married with three daughters and a son. He was not the ‘fashionable and photographed’ bishop, a trendy who might advocate practices and doctrines which would offend the sensibilities of any narrow-minded or puritanical church-goer. He was not a ‘Red Dean’ of Westminster, who believed that Stalin has established an Earthly Paradise. Nor was he Barnes, Bishop of Birmingham who once described himself as ‘a troubled theist’ – a difficult phrase which an unconcentrating news sub-editor rendered next day as ‘a troubled atheist’.

But it was this Bishop of Woolwich who wrote a very short paperback and offered it to a small Christian publishing company. When it was ready for what promised to be a tiny sale, the good Bishop wrote an ad. for his own book in The Observer with the hardly subtle headline ‘Our Image of God must Go’. Not even the mild Dr Robinson could have predicted the result; His tiny paperback opus Honest to God sold 300,000 copies in the three months after publication and was translated into other languages many times. Though hard to believe, it might well be that this little book was the beginning of the not so gradual collapse of the Church of England, and a great wave of disbelief in the Christian Church generally. Many previously practising Christians felt that what Robinson wrote was simply heresy, questioning the very basis of what they thought was Christianity itself. The Archbishop (Ramsey) wrote a short essay denouncing Honest to God, insisting on a more orthodox theology, but Macmillan wrote to him, ‘I think it is a mistake to bewilder people.’

The Most Reverend Arthur Michael Richard Ramsey was the hundredth Archbishop of Canterbury, and was surely one of the strangest occupants of that office, though historically one of the most significant. The old Great Britain was breaking up by the Sixties, in every sense, and Ramsey deliberately and systematically set in motion the machinery and the means required to dismantle the Church of England. He and others of course, but he was one of the key players.Part of the ‘dismantling’ which began in the middle Sixties of the last century was the Church of England’s stunning policy of selling off its parsonages, rectories and vicarages, as well as empty churches and accompanying land. The descending trend of church attendance was alarming and relentless. In 1968 only 5% of Anglicans went to Communion Service. Hardly anyone used churches for weddings, baptisms or funerals. Within ten years of the publication of Honest to God churches in England were getting together in desperation, calliong it ‘ecunemism’. In the future years,the Church would make the effort to delude itself that the sudden secularization of the West was not terminal. They tried popular music to attract believers, but the dwindling congregations were nothing to the millions who had firmly decided not to attend church. Britain after the 1960s became a purely secular state.

(I am indebted to Andrew Wilson and his book Our Times, the age of Elizabeth II; Hutchinson, 2008)