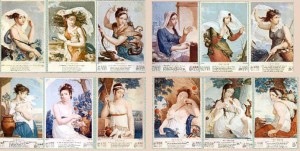 During the French Revolution (q.v.) the National Convention decided on a sublimely Gallic act to herald the start of a new epoch for France, and, if popular, for all humanity as well. It would also carry on the process of anti-clericism (burning of churches, slaughter of bishops, priests, monks and nuns etc.), or the organized de-Christianization of France. The old calendar would be swept away. Structures and names were planned by a special committee directed by Deputy d’Eglantine.

Year I would begin with the abolition of the monarchy and the declaration of the First Republic – 22 September, 1792. Twelve 30-day months were introduced and divided, each comprised of three 10-day weeks, thus eliminating Sundays. Nature and the seasons provided the names of the new months. They are difficult for foreigners to spell and pronounce, again a typical Gallic gesture:

Brumaire gave its novel name to a coup, organised by Sieyés, one of the Directors in the revolutionary government, on 9/10 November, 1799; it was planned by Talleyrand (q.v.) and Napoleon Bonaparte himself: he was to be its military leader. Surprisingly, Bonaparte made a muddle of his part of the plot, and had to be rescued by his brother Lucien. However, it was only intended to produce limited constitutional changes, though it ended with success for Bonaparte. The Directory was overthrown and the future Emperor assumed absolute power as First Consul.

Vendémiaire 12 and 13, 1795 saw a royalist-backed rising in protest against a decree passed in the Convention, which stated that in the elections for the new assembly at least two-thirds of the seats must be reserved for outgoing members of the Convention! This was crushed by the big presence of Barras, one of the French Revolution’s outstanding leaders, who employed the young officer Bonaparte to quell the uprising. He did it by using cannon against the crowds gathered in Paris. Our dates would be 4th and 5th October.

Thermidor 8/9 in the 2nd Year (our 16th and 17th July), 1794 are important because this was the moment of the coup d’état which overthrew Citizen Robespierre and his supporters, thus putting an end to the most savage period of the Revolution. Chief instigators were Barras and Fouché (q.v.), both ex-Jacobins. After they had lopped off the head of Robespierre they set about dismantling machinery of the Great Terror such as the ‘Committee of Public Safety’, until the time of Stalin the most lethal committee ever invented. Napoleon threw out the new calender in 1805. Some Frenchmen become enthused with nostalgia when the subject is mentioned.