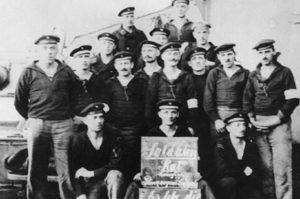 This was not a socialist revolution, as in Russia and France; nor was it anti-colonial, as it was in North America. It began just one month before the end of the Great War – on October 29, 1918, when sailors of the Imperial Fleet firmly refused to put out to sea from Kiev to engage the British fleet. Not wishing to commit suicide, they formed sailors’ councils which multiplied and spread by 6 November to all major cities, ports and garrisons in Germany and on the Western Front. Unlike Russian, French and American revolutions it was bloodless, as the German regime could not resist it. It was moderate – no-one wished to throw out the existing social system by murdering the nobility. Most members of the Councils based their ideas on new Bolshevik notions. What they wanted to do, they repeated, was to maintain law and order in a country which appeared to be losing the four-year war.

Bavarians blamed the Berlin government for its failure to make peace, and the socialists. led by Eisner, deposed the Wittelsbachs (q.v.) from the throne, declaring a republic on 8 November. Eisner said that in his opinion Germany was not ready for a fully socialist revolution. The government promised to respect private property. The Majority Socialists (as what is now the SPD were called) were in a powerful enough position to decide what course the revolution should take, but their leaders Ebert and Scheidemann moved with caution. They insisted on coming to overall power as the result of an election, not by bloodshed. Ebert had lost two sons in the War. At first he said he did not wish to dissolve the monarchy, though he was later persuaded by his own supporters to demand abdication. The Kaiser, his head still full of Wagnerian glory, refused, but a successful general strike changed his mind. He abdicated and his Chancellor, Prince Max of Baden gave his office to Ebert, who wished to wait for a constituent assembly to decide if they wanted a republic or not.

Scheidemann however surprised no-one by declaring the republic to a crowd gathered outside the Reichstag. He also invited the radical USPD to join them, though it’s policies differed from Ebert’s. The SPD, as it was now called, thought the revolution was over when in October a government was promoted in which ministers could be members of the Assembly. The USPD disagreed, as they disliked the authoritarian hold over the people traditionally held by German governments. It also wished to remove the power of the old aristocracy by the nationalisation of important industries, dividing up the Junker estates, and throwing out aristocratic domination of the army, judiciary and civil service. Ebert still had enough clout to ally himself with the army to deal with the extreme Left. This caused the USPD to leave the government in December.

The Supreme Command offered support to crush the impending threat of Bolshevism when the Spartakist Rising (q.v.) took place in January 1919. The communists then declared the Ebert government out of order and out of office, but the army generals, finding their own troops unreliable, used the Freikorps (q.v.) to crush the uprising and kill its leaders, Rosa Luxemburg and Karl Liebknecht. Still the German Revolution was not over.

The workers were infuriated by the use of the Freikorps and the failure of the SPD to achieve a majority in the January elections. The USPD rejected parliamentary democracy and called for rule by workers’ councils. Soviet influence was seen everywhere. Another general strike was called, and once again the government summoned the Freikorps, which by now had a very bad name. In ‘The White Terror’ which followed thousands of ordinary people from the working classes were killed. When the Bavarian communists were defeated the German Revolution came to an end. It had had very little in common with the French, Russian or American revolutions, and achieved virtually nothing: the structure of society was unaffected; the army, judiciary and civil service remained unreformed; a government still sat in the Reichstag; the pure socialists had become dependent on army generals, themselves declared opponents of socialism and democracy. The USPD blamed the SPD for ‘betraying the revolution’; the German Right however said both parties had ‘stabbed the Fatherland in the back’, and named them the ‘November criminals’. This was the sad legacy which the Weimar Republic inherited, and which Adolf Hitler was soon to upset.