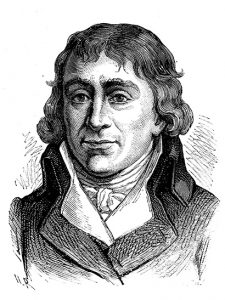 In the General History blogsite many posts have appeared dealing with different aspects of the French Revolution; there will have been many references to Jacobins and Girondins, both being a kind of politically-motivated club or political party with a multitude of members, who either smiling or snarling at each other helped to cause the Revolution. We have dealt extensively with the Jacobins, and now it is the turn of the Girondins.

The majority of these deputies came from the department of Gironde in south-west France – whence the name. They were occasionally called ‘Brissotins’ after their leader Jacques Brissot: it was he who played a significant part in persuading the Assembly to declare war on Austria in 1792. Brissot thought such a conflict would arouse enthusiasm for the Revolution, which had begun in July 1789 with the storming of the Bastille prison in Paris.

There had been a continuous struggle between the two parties (or clubs), still hot in June 1793. Neither club thought or claimed it was a party as such, and they rather warily agreed with each other on policy. They were linked on subjects such as a strongly-held belief in the Revolution and the Republic; they loathed what they saw as ‘privilege’ (embodied by the monarchy and aristocracy); they wanted free trade within and outside France; their anti-clerical stance was clear. Where they disagreed was a result of deep distrust of the other, and in the sources of support. The Girondins, for instance, had most of the Paris newspapers on their side, and were popular in the outlying provinces, but the Parisian sans-culottes (q.v.) hated them because they opposed the attack on the Tuileries Palace in August 1792.

The Girondins backed the right of the provinces to manage their own affairs without cumbersome interference from Paris. That had indeed been the policy of the Constituent Assembly from 1789 to 1791. Their fatal mistake was trying, at the ‘trial’ of Louis XVI in January 1793 to save his life by holding a national referendum on his future– which automatically branded them as royalists in the eyes of the ferocious Jacobins, led by Robespierre (q.v.).

General Doumouriez, who was said to have a close relation with the Girondins, lost the battle of Neerwinden in March, 1793, but nonetheless he turned his army round and declared he would march on Paris to restore the monarchy. The Jacobins reacted as might be expected, and the Girondin movement was weakened. The finale came on June 2 when sans-colottes surrounded the Convention and demanded (with menaces) the expulsion of all Girondins from the Assembly. This body, perhaps terrified, agreed to the arrest of twenty-nine Girondin deputies and two ministers. They were all guillotined in October, and the Girondins melted away, leaving the Jacobins to terrorize France until their own leader, Robespierre, was denounced and killed.