Home/Asian History, History of Japan, History of the Far East, US History, World History/The importance of being Okinawa
Previous Next

Okinawa is a Japanese island some sixty miles long and very narrow – at certain strategic points only two or three miles wide. But it could prove to be the springboard for a massive invasion of the enemy mainland. It is the largest island of the Ryukyu archipelago, and it was that there that the worst, hardest and bloodiest battles of the Pacific War took place between the beginning of April and 22 June, 1945. The Japanese had carefully built and preserved defence lines already built and manned, and had sworn to their Emperor that their resistance would be fanatical. The latest artillery was concealed behind camouflage, and munitions were ample.

As the US fleet approached, Japanese aircraft and MTBs tried to destroy it, mostly by suicidal attacks by air and sea. A colossal battleship, Yamato, which seemed invincible – indefatigable in fact – steamed into battle with her 18-inch guns deafening everyone, but the usually wondrous Nipponese administration must have been asleep, or resting, because Tamato had only enough fuel for a one-way voyage, though this seems difficult to believe. The great ship was sunk by carrier-based US fighter/bombers before reaching sight of Okinawa. The resulting loss of life was calamitous. 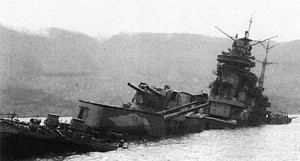 The end for the Yamato / padresteve.com

The famous (and extraordinarily brave) kamikaze pilots, scarves in place, egged on by their Emperor and their religion, crashed four thousand aeroplanes tryingt to crash on to US shipping, an act of stupidity which heralded even more stupidity later. Japanese air power thus lost what was left of its air superiority.

The battles at Okinawa have become legendary, as indeed they should. The Americans lost around seven thousand men killed, and 32,000 wounded seriously enough to be invalided home. Another 26.000 suffered from combat fatigue, weariness and breakdown, such was the super-stress of the conflict. Thirty-six US ships sank, and no less than 763 aircraft were shot down.

Finally, this invasion exclusively mounted by the USA showed the world how high the cost of invading the Japanese mainland would be, using conventional forces. It may well have influenced the US President Harry Truman into using an atomic bomb first on Hiroshima, and then another on Nagasaki (q.v.).