The influenza pandemic (and panic) of 1918

The influenza pandemic (and panic) of 1918 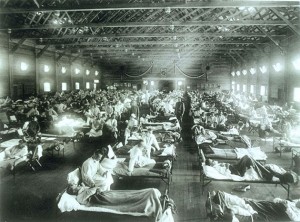 Mass treatment for influenza in the USA / en.wikipedia.org

The Plague, or the Black Death or Bubonic Plague struck down nearly a third of the population in most European countries during the Middle Ages. There being no known antidote, populations had to wait until these plagues vanished or burnt themselves out. Literally, as it turned out in the Plague during the reign of Charles II in England, when the Great Fire of London succeeded where no doctors or medicines could. Influenza or the rudely named ‘Spanish ‘flu’, is a common virus which spreads rapidly, attacking very young and elderly people for preference. Alexander Fleming’s discovery of penicillin, had it been made in the Middle Ages, would according to the scientists have killed the Bubonic virus instantly. Fleming was born in the late Eighties of the nineteenth century, and penicillin was still not around in 1918 when the fly virus mutated and a very virulent form of it occurred in three different forms in a matter of months.

The flu appeared first, we are told, in the Mid-West of the USA during the Great War, and was then distributed around the globe by troop movements after America entered the Great War in 1917. The second wave of flu – August/September 1918 – was the worst in terms of mortality. Unlike previously known strains, this 1918 mutation seemed to affect males between fifteen to forty years of age, though no-one can explain why. It was as if the huge numbers of men killed in the War was not enough.

Government and the medical profession could not control or defeat the outbreak; going into quarantine was unsuccessful; vaccinations useless. In the United States 28% of the population caught the flu, but thankfully only 2.3% of these died. These figures may not be accurate as pneumonia often follows flu and might have been listed as ’cause of death’. In South Africa as many as 300,000 people may have died of influenza, while the figures for India seem to astronomical to be believed, though numbers like eighteen million are quoted. In Western Samoa 25% of the population died in the 1918/1919 outbreak. Perhaps the world mortality rate was somewhere between thirty and one hundred million. What is certain, and not often quoted, is that more people died in the pandemic that from direct results of the First World War.

As I write a new panic is establishing itself in Europe, as a result of a newish and extremely violent virus called ebola. Originating in the poorer states of Africa, the virus which has no real antidote as yet, has been found in patients in Spain and the United States.