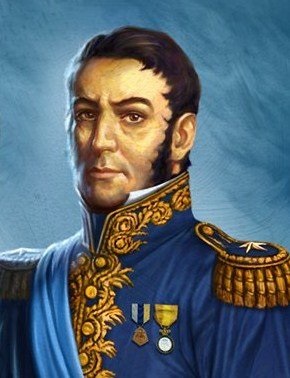 José de San Martín was born in 1778, the son of a Spanish army officer. He left the Argentine with his father and family when he was eight, as his father had to return to military duties in Spain. Naturally, as these things run in the family he trained as a soldier, and fought against Bonaparte from 1808 to 1811, in the Spanish War of Independence. In 1812, three years before the Battle of Waterloo, he went back to Buenos Aires where he joined the military regime.

San Martín knew there could never be Argentine independence from Spain as long as Spanish armies remained in strength in Chile and Perú on the other side of the Andes. He was determined to kick the Spaniards out of Latin America and when he had gathered a small army loyal enough to follow him he crossed the mountains (12,000 feet in places) with his 5000 men, swooped down on the Spanish troops taking them by surprise as no-one believed he could have achieved such an extraordinary enterprise.

San Martín thrashed the enemy (his own people) at Chacabuco and entered the Chilean capital, Santiago. After another astounding victory at Maipú he personally declared the independence of Chile. There was now Perú to deal with.

Because of the impossibility of crossing the fiery Atacama desert to Perú, he elected to make the journey by sea. Sailing in a fleet commanded by the friendly British admiral Cochrane, San Martín landed on the Peruvian coast in 1820, after a voyage of a thousand miles. Not surprisingly, there was little the small Spanish garrisons could do and he entered Lima from its port at Callao unopposed. The Spanish troops withdrew into the mountains and San Martín declared Perú independent in 1821. He then set about reforming everything, even ending Indian tributes and slave labour, actually emancipating the slaves, which did not make him popular with the owners of the enormous haciendas.

Who, they asked among themselves, did this Spaniard think he was, declaring Perú independent, when he was not even a Creole. The caciques decided San Martín simply wanted to make himself King of Perú and Chile (for a start) and refused to support him. Disillusioned, he set off for Guayaquil to meet the other great liberator Simón Bolívar who was a Creole, but he wanted no truck with José de San Martín. To put it politely, they did not get on.

He returned to the Argentine but found civil discontent and small wars everywhere; by now completely discontent, he set sail for Europe in 1824, only three years after founding the independence of Perú. He retired to France (it would have been difficult to enter Spain, as he had just helped destroy the Empire) and died there in 1850 at the age of seventy-two. 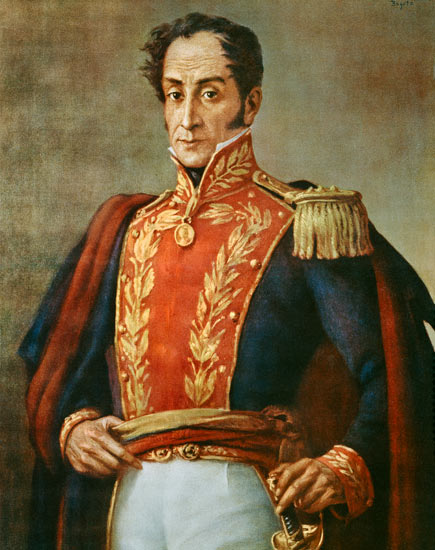 Simón Bolivar was born into one of the wealthiest Creole landowning families in Venezuela in 1783. When Bonaparte invaded Spain in 1808 Bolívar took advantage and demanded independence for his country, knowing that it would be impossible for Spain to beat off Napoleon and deal militarily with insurrection in her colonies. A Venezuelan congress declared independence in 1811. Simón’s determined attempt to become the Great Liberator of Spanish South America had begun.

Unfortunately he found that not all Creoles wanted independence, just as many colonists in North America had not wanted independence from Britain before 1776. This meant that the South American wars of independence were very much civil wars as well. Things were not easy for Simón Bolívar but his determination to change everything whether the people liked it or not proved constant.

In 1812 loyal Spanish and Venezuelan forces drove him right out of Venezuela to take refuge in what was then New Granada (now Colombia). One year later he returned to his own country with large forces and was acclaimed as ‘Liberator’. Sadly for him, the Spanish War of Independence against France ended in 1813 and Spanish troops were sent to Latin America as quickly as possible and the independence movement was crushed – except in Buenos Aires, where insurrectionists had decided to agree with each other, a rare festivity.

Simón rushed off to Jamaica and then to Haiti where he planned his next invasion of his own state. He was clever enough to appreciate that an attack on Caracas, where the Spanish were strongest would be useless, so he landed in the Orinoco estuary in 1817. Helped by the local llaneros (mounted ranchers and cowboys) and also by many British veterans of the Napoleonic Wars, he took control of the Central Plains, and moved west again to New Granada.

Following a hazardous and complex crossing of the Andes, he defeated the royalist at Boyacá and took Bogotá, the capital of New Granada. It was doubtless a great help when in 1820 there was an army revolt in Spain, and the new liberal government ordered colonial authorities to make peace with the rebels. But most Creoles by now were fed up with the Spanish and wanted independence anyway. In 1821 Bolívar defeated the Spanish army at Carabobo (face of a fool), Caracas at last fell and then all Venezuela declared for total independence.

Bolívar was declared to be President of Gran Colombia, which was the union of Venezuela, New Granada and Ecuador (not yet liberated!). Flushed with success, he joined with General Sucre and invaded Ecuador to ensure the people’s liberation.

In 1822 Bolívar met secretly with San Martín, who had moved into Perú after subjugating Chile, but we do know what they said to each other. We do know that San Martín left immediately afterwards for Europe and never returned. Bolívar then sent Sucre to Ayacucho (Perú) to win a decisive battle at a height of over 9000 feet. It was 1824.

Simón Bolívar’s wish was to form a union of all South American states (among which I presume he included Portuguese Brazil), following the example of the United States of America. In 1826 a congress was called at Panama with this intention, but nothing came of it. Nor did the congress approve of his idea of the Andean Confederation of Gran Colombia, Perú and Bolivia. Gran Colombia fell to pieces, with Venezuela and Ecuador declaring their independence from the newly-declared independent state. In an understandable state of despair, Bolívar prepared himself for a self-imposed exile in Europe (as San Martín had already done), but tuberculosis overtook him on the coast of Colombia, and he died from it in 1830. He was forty-seven years old.