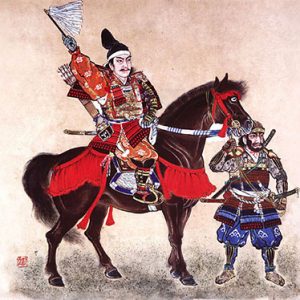 Yoritomo, first Shogun of many

A ‘Shogun’ was a Japanese general of armed forces, but he was also chief of a system of government which dates from the end of the 12th century. He was a ‘barbarian-quelling-gemeralissimo’ (seii-tai-shogun), a title bestowed by the Emperor himself.

Probably the most important in Japanese history were the Tokugawa – shoguns from 1603 to 1868 – nearly three centuries – who ruled as military dictators while the Emperor was merely a figurehead, with little or no actual power. The rule of the shoguns controlled and regulated life in Japan down to the tiniest detail, and was naturally unpopular, though fear of these peerless Samurai kept noses to the grindstone. The shogunates were terminated during and after the Meiji Restoration (q.v.).

The Kamakura Shogunate was overthrown in 1333 and replaced by the Ashikagas. Their government was based in Kyoto; they were an offshoot of the Minamoto family.

Under the 3rd shogun, Yoshimitzu, the imperial schism caused by Daigo II’s exile and the establishment of a rival court south of Kyoto was healed with the fusion of the two imperial families in 1392 But during the fifteenth century the increasingly powerful military governments eroded imperial authority leading to a series of blood-letting wars. As a result, the last of Ashikaga shoguns were in the not very gentle hands of their leading vassals, most of whom were themselves Samurai, with their own armies.

Japan’s third warrior government was established by Tokugawa Ieyasu when he was given the hereditary title of Shogun after his victory over rival warrior families at the great battle of Sekigahara in 1600. Thus began the Tokugawa Shogunate, with government based in Edo (now Tokyo). This third shogunate proved to be the most durable of the three, providing peace and stability until the middle of the nineteenth century, when external pressure from Western powers was applied to make radical changes in Japan’s domestic, social and economic policies. Modernity, in other words. The shogunates were doubtless a form of centralized feudalism. The Samurai elite ended by becoming indebted to the rapidly emerging commercial and industrial classes.