Home/History of the Cinema, US History/The St. Valentine’s Day Massacre
Previous Next 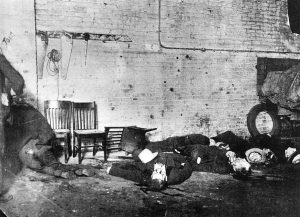 That morning almost his entire gang were standing about smoking, waiting for the arrival of their boss, who was late. They were to drive heavily laden lorries to Detroit in a big operation. Once in Detroit they would unload the booze, and drive on to the border with Canada where thousands of gallons of illegal hooch would be awaiting collection. That was the plan anyway. By ten a.m. seven men were nervously waiting for Moran. One of them was Wienshank, a civil servant wanting to join the gang; another was Heyer, a qualified accountant and dead shot; Clark was there, who acted as Moran’s bodyguard and confidant – he was his brother-in-law too; Frank and Peter Gusenberg, paid killers, were hanging around joking; with them was Doctor Schwimmer, friend of Moran’s since childhood and the gang’s medical man. May, a motor mechanic, took advantage of the wait to adjust the transmission on one of the lorries. Suddenly the open doors of the garage were blocked by a large black car: doors opened and stayed open and four men with Thompson sub-machine guns out of sight inside long raincoats walked quickly inside. Two were dressed as policemen, a sight which relieved most of the seven astonished gangsters waiting for their chief. Chicago policemen had the reputation of being as bad or even worse than the crooks. Everything would be all right.

Facing a Tommy gun at close range is the same as running into a speeding express train. The .45 calibre bullets leave the smoking barrel at the rate of five or six per second. The new arrivals produced their weapons and indicated that the seven, including the mechanic (but not his savage dog, tied growling to the fenders of a truck), should line up against a wall of the premises. The four ‘typewriters’ started up their infernal racket and the seven men were shot to pieces, as crude photographs of the scene taken later by the police and press show. Then the four killers climbed into the sedan and drove away.

The massacre was the result of internecine warfare between Alphonse Capone’s gang and Bugsy’s. Moran had in fact almost driven into it, but as he spotted the suspicious black sedan blocking his entrance he had quickly driven on. When questioned later, he said that ‘only Scarface (Capone) could have organised such a slaughter’. Three of the killers were shortly afterwards found dead in an abandoned car, and the fourth vanished. It was assumed that Capone had sacrificed them when Moran offered a truce.