Home/Russian history, World History/The USSR and its leaders
Previous Next 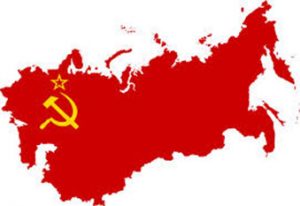 This article deals with the former Soviet Union, a.k.a. Union of Soviet Socialist Republics. The USSR was a federation of fifteen republics, forming what was the world’s largest sovereign state from the 1920s until dissolution in 1991. To call it a ‘sovereign’ state is perhaps a misnomer, as the regime that ruled the Soviet Union was 100% Communist, having executed most of the Russian royal family in Siberia in 1918.

By the 18th century Russia had become a great power to be reckoned with, not just a semi-mythical and apparently threatening black bear, somewhere beyond the rainbow. Its territory extended from Eastern Europe into Southern Asia, and right through Northern Asia to the Pacific Ocean. In 1917 a cataclysm called the Russian Revolution changed everything for Russia and the rest of the world. Imperial rule was overthrown by Bolshevik victories over the ruined old order, and a Soviet government was headed by Lenin (q.v.). After he died Stalin took over and began ‘vigorous’ social reforms, which included the collectivization of agriculture and a massive build-up of industries. Soviet influence became even larger after the Second War, which all historians reckon would not have been won – even with the presence among the Allies of the United States – without Soviet Russia’s colossal armies and their ruthless use.

A corridor of communist-dominated countries arose between the USSR and Western Europe, heralding the Cold War. The words ‘Iron Curtain’ were famously used. In the 1960s a direct clash between Presidents Kennedy and Kruschev nearly climaxed in nuclear war, averted at the last moment. In the 1970s however, the first signs of relaxation came with a process of détente leading to a series of disarmament agreements, under various acronyms – ‘SALT’, ‘ START’ etc. There was some easing of international tensions between the USSR and the West, particularly the United States, though one of her presidents (Reagan) called the Soviet Union ‘The Evil Empire’, perhaps because he was an actor before becoming president, and had seen Star Wars a number of times.

In the 1980s President Gorbachev introduced policies of Glasnost and Perestroika, both of which meant political and economic reform, but coincidentally weakened Communist Party control, a result perhaps Mr Gorbachev had not looked for. Above all local independence movements were encouraged by what appeared to be a loosening of the formerly iron grip. Communist regimes in the Eastern European ‘satellite’ states were superceded by 1989 (Poland, Hungary, Czechoslovakia etc.) and even some of the Soviet republics started demanding independence from the giant. When ultra-conservatives tried reversing the process of reform in the 1991 August coup, they only succeeded in achieving the opposite, affecting the USSR so seriously that its constituent republics started declaring independence unilaterally. By December of 1991 seventy years of Soviet Communist rule was formally dissolved, though it should be pointed out that Russia is still the largest self-governing territory on this planet, with Canada coming second.