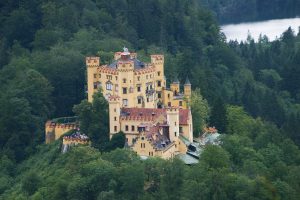 Hohenschwangau – one of the Wittelsbach homes / es-wikipedia.org

The Wittelsbach Dynasty. This once-regal Bavarian family can trace their ancestry, like so many other grand families back to the Emperor Charlemagne, but more direct ancestry can be found in the family Scheyern, which ruled a diminutive but autonomous territory around their castle at Pfaffenhofen. When Europe was in chaos (around 1180) through crusades and intercenine wars the Emperor Barbarossa made the head of the Scheyern family Count Otto the new Duke of Bavaria. The Wittelsbachs are unique in Europe because they never gained territory or power through wars.

Otto von Scheyern moved his family and newly assembled court to Wittelsbach castle, assuming its name as his own. Thus was born the royal dynasty. By 1314 a Wittelsbach was proclaimed Ludwig III of The Germanic States. This was ‘Ludwig the Bavarian’ who in 1328 was named Holy Roman Emperor (q.v.). He had a lot of trouble with the Church in the form of Pope John XXII, who excommunicated him and attempted to revoke his imperial dignity and titles. Ludwig the Bavarian was not the man to take this lying down and instantly marched a vast army over the Alps with himself at its head. Once in Rome he deposed the troublesome pope, but this did not end the problems Catholic Wittelsbachs had with the Vatican, especially over problems of religious influence and their own government policies.

After being both dukes and electors for hundreds of years the family gained a real kingdom in the nineteenth century (1806). Maximilian Joseph I allied himself with Napoleon Bonaparte, often a good career move. Virile Max went even further by marrying his daughter Amelia to Bonaparte’s stepson Eugene de Beauharnais. When the Grande Armée swept throughEurope, Max’s soldiers marched with it. As a reward, the French Emperor confirmed the Bavarian monarchy.

Other Wittelsbach daughters were married into distinguished families; Elizabeth married the chief of the Hohenzollern family, thus becoming Queen of Prussia: Marie collared the King of Saxony, while Caroline caught the Emperor Franz I of Austria, no less. Sophia rather scandalously married her own nephew, heir to the Austrian throne, and became the daughter-in-law of her own sister – Caroline! This kind of thing was quite normal for the Wittelsbachs, among whom incestuous marriage had long been a way of life. Other royal European families thought them a little eccentric, while classes lower down the scale thought them mad. Maximilian Joseph got his relations to fill the courts of Austria, Baden, Hesse, Prussia and Saxony – all royal; later there were further links with the royal houses of Denmark, Great Britain, Greece, Romania, Spain, Sweden and Russia.

The Kingdom of Bavaria was in the 19th century one of thirty-nine independent states which together formed the German Bund or Confederation, created in 1815 at the Congress of Vienna (q.v.). It was also the largest of the thirty-nine, with boundaries including the Tyrolian Alps, Franconia and parts of Swabia, much of the swift waters of the rivers Danube, Inn and Isar. The population at that time was around four and a half millions, under the temporal influence of the Wittelsbachs and the spiritual one of the Roman Catholic Church. All of this came to an end in 1918, after Germany was defeated in the Great War, though the Wittelsbach family still make claims to the throne of Spain, which actually exists; conversely, a Spanish duke (Cádiz) still claims to be the king of France, where it does not.