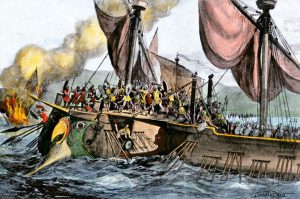 Historians are convinced that navies, squadrons of fighting ships, were first developed by the ancient Greeks and they are probably right. In the seventh century B.C. The Greeks had built true warships with specially constructed bows designed for the deliberate ramming of other vessels, and decks from which marines (half-soldier, half sailor) could operate catapults or hurl javelins and other missiles, or launch boarding assaults. Oars were the main propelling force, forwards or backwards, but sails of a primitive type could be hoisted for sailing in favourable winds. The Greek ship was called trireme, on account of its three banks of oars at starboard and port sides. The trireme was capable of high speeds, and was, perhaps more importantly, highly manoeuvrable. Greek warships dominated the eastern Mediterranean for two hundred years.

The Athenian fleet based at Salamis beat off Persian invasion of the Greek islands, making conquest impossible for Xerxes. But Athens’ dependence on her navy led her to neglect her armies, a sad fact that was one of the causes of her defeat in the PoloponnesianWar in 404 B.C.

The Romans’ powers were based on the size, training, loyalty and discipline of her soldiers, but they could raise fleets of fighting ships whenever necessary. It was for instance very necessary when fighting against a great naval power like Carthage. Pompey must have been a marine at heart, because he combined astute generalship with a fine capacity for war at sea. It was Pompey who swept the Mediterranean clean of pirates; still, Rome’s neglect of her navy cost her any abiding control of the sea.

The Byzantine Empire’s dromon used one hundred oars in two banks. This fighting ship was essential in the battles against the ever-approaching Turks, as well as the endless struggles against piracy (q.v.). They built better ships than anyone else, and had the added advantage of the first kind of fire-power: this ‘Greek Fire’ was an incendiary mixture directed against other ships from a tube or a ballister.

Meanwhile in the cold northern seas the Vikings used very fleet warships with a crew that could manage oars as well as fight. Slaves had been used in all previously described navies. The longship (q.v.) could make long voyages under sail, and employed the oars when engaged in battle. Though comparatively small, the longship could take two hundred men as crew and commanders, and because of its shallow draught could sail upriver, or navigate coastal waters. It was a ing of western England, Alfred, who built up the first English navy of ships based on the Norse design.

In the fifteenth century came the development of ships equipped with the square-rigged sail and rows of cannons. Elizabeth’s squadrons of naval vessels was quite small, but bigger armed merchantmen were pressed into service. In the sixteenth century the first ‘English Navy Royal’ entered existence on a permanent basis. The first Tudor, Henry VII established Portsmouth as the first naval base, and built an efficient dry dock there. Henry VIII took off time from the ladies in order to pioneer the gunport cut in the ship’s side to allow heavy cannon to be mounted in large numbers, which in turn produced the devastating phenomenon called the broadside, though it must be said that loading and firing these guns took much too long.

The Spanish held on to the idea of oar-propelled galleys for longer than anyone else, but built the ships to take cannon as well as oarsmen. These galleys were used a great deal in Spain’s Atlantic operations. England’s navigator and hard man Sir Francis Drake led expeditions attacking Spain’s communication with her colonies, and waited, frequently with success, for the heavily laden treasure fleets emerging from Spanish colonies in South and Central America. When King Philip II of Spain launched his enormous Armada 1588, with the avowed intention of invading England, the English navy met it in the Channel with a mixture of royal fighting galleons and privately-owned ships, the latter very often commanded by piratical adventurers like Drake. The English ships were smaller, lower, and enjoyed a higher rate of fire than the vast Spanish galleons, and the first Great Armada was defeated by manoeuvre, fire power, fire ships and finally terrible weather as ships of the stricken Armada tried to use the North Sea, and the northernmost coasts of Scotland and Ireland to get back to Cadiz and safety. This was all very well, and entered legend, but no state at this period could achieve domination of the seas.