War in the air: part I; the early days

Home/World History/War in the air: part I; the early days
Previous Next

War in the air: part I; the early days 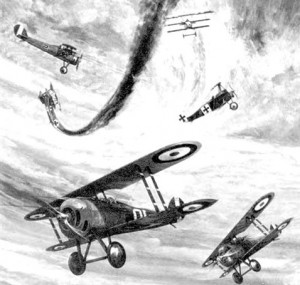 In the very late nineteenth century hot-air balloons were first used in Europe for observing enemy troop movements. War in the air had started. Later the same balloons were used for comparatively accurate direction indication for artillery. In Woolwich, England, the British Army Balloon School was founded (in 1878) to train soldiers in this new mode of war. The balloons were soon found to be limited in manoeuvrability and the new airships or dirigibles replaced them. The Germans were particularly fast in this new development, and began arming the airships too.

After the success of the Wright brothers in 1903, fragile wood and canvas aeroplanes powered by engines began to appear everywhere in Europe and the United States, but it was in France that the enormous potential of fighting from and in the air was first recognised. When the Great War started in 1914 aircraft were available that could fly up to 120 miles per hour – and stay in the air for up to two hours with the aid of freshly designed fuel tanks. The aeroplanes were small, and at first could take only two crew, the pilot and the observer/gunner. They were most uncomfortable, but at least the airmen could return to their airfield (if they survived war in the air) to sit in the sun and drink tea.

In 1914 Britain established two ‘air forces’; the Royal Flying Corps (forerunner of the RAF) which was part of the army, and the Royal Naval Air Service (later the Fleet Air Arm), part of the navy. Army aircraft began by artillery-spotting and reconnaissance, but the pilots reported that their potential as aggressors was unlimited. They were first armed with small bombs, actually dropped intro the airstream by hand of pilot or observer, but the designers soon replaced this crude and innaccurate method by inventing special release mechanisms. It was one-sided warfare as troops on the ground did not yet possess anti-aircraft weaponry, leaving soldiers very vulnerable to air attack. Machine guns were at that stage mounted behind the pilot/observer, as the brilliant idea of shooting through the propellor by syncronisation had yet to be introduced.

As the Great War developed, so did the bombers and fighters and the number of machines in the air or being prepared for battle increased dramatically, particularly on the Western Front. ‘Ace pilots’ became famous, though the survival span for pilots in 1915 was spectacularly low. The Germans produced aces like Max Immelmann (1890 – 1916) and the Baron Manfred von Richtofen (1892 – 1918), the ‘Red Baron’. Britain produced several aces, but the most famous was in fact an invention – ‘Biggles’, who in the W.E Johns books threw his Sopwith Pup or Bristol Bulldog around the clouds like a dragonfly.

Large formations of fighters were built up as the factories produced more and more aircraft, and these became known as ‘flying circuses’. Richthofen was known to have scored eighty ‘kills’ before he himself was shot down.

Airships from Germany flew over England for the first time, and dropped bombs, causing more fright than damage, but this was a premonition of what was to come in the Second World War -to both sides. Meanwhile, after 1918 the development of aeroplanes used in warfare developed enormously, while airships were seen, rightly, as dangerous. The British lost their RIOI in 1930 and the Germans their Hindenburg in 1937. They were considered more useful as static anti-aircraft defences.

In the Spanish Civil War aggressive aircraft were first seen as efficiently lethal weapons, much used by the German and Italian allies of General Franco’s Nationalists. The War was used as a practice ground, especially by the rapidly growing German Luftwaffe.