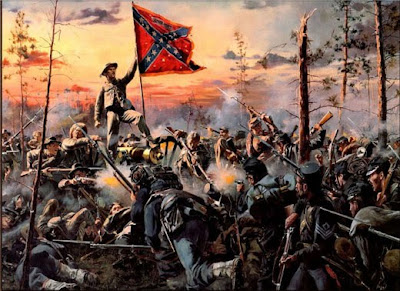 Like all civil wars, none of which are the least civil, the American Civil War was a murderous and bloody conflict between brothers, fathers and sons, uncles and nephews and cousins. In other words, it was fratricidal. It lasted four years, and had to take place basically because eleven Southern states wished to leave the Union. The war was fought between the United States’ federal government and the Confederate States of America.

The conflict started on April 12th, 1861. After a bombardment mostly without casualties, Federal leader Robert Anderson surrended Fort Sumter in the harbour mouth of Charleston, South Carolina. His garrison consisted of around 85 soldiers. He had been besieged by around 5,500 Confederate troops under Beauregard.

END_OF_DOCUMENT_TOKEN_TO_BE_REPLACED

These three years saw a conflict that really was a civil war, just as the Wars of the Roses in England were not. A real civil war splits the country, regions, families, married couples and best friends in two, for purely ideological reasons. England’s feudal War of the Roses was a series of basically private battles fought between members of a powerful aristocracy, employing their private armies, with the aim of securing the throne for one family or the other.