Dorothy Parker: some things worth remembering . . .

She was born Dorothy Rothschild (nothing to do with the bankers) in 1893 and died just over seventy in 1967. She was American, one of the founders of the wits’ Round Table at the Algonquin Hotel on West 44th Street, New York. She was not unhappy all her life, but never really happy. Here are some of the sayings she is remembered for: END_OF_DOCUMENT_TOKEN_TO_BE_REPLACED

Poor Laws in Britain, and ‘Speenhamland’

The Poor Law provided during the reign of Queen Elizabeth I at the very end of the sixteenth century was still in force at the very beginning of the nineteenth century. Not much progress had been made during those three hundred years. A Poor Law is supposed to provide public relief, that is benefits paid out of the public purse to the destitute. Poor agricultural organisation and constant wars leaving thousands of out-of-work ex-soldiers ensured there were always destitute people.

In Britain parishes were made responsible for the support of the old, infirm and insane. Workhouses gave work to the workless, and were supposed to feed their otherwise helpless children. The cash necessary came from local rates and taxes, often supervised by unqualified overseers, who might succumb to temptation. END_OF_DOCUMENT_TOKEN_TO_BE_REPLACED

The English Pope Hadrian started the troubles in Ireland with his bull Laudabiliter / historytoday.com

Before the 5th century, Ireland was virtually unknown, except as a wilderness island too far away and consequently a dangerous target for ambitious figures during the last years of Roman Europe. But it was a fine refuge for storm-bound refugees, and the Norsemen could build a secure base here from which to sally in search of a bloody encounter with the Saxons of England. Both Dublin and Limerick were founded by the Vikings. END_OF_DOCUMENT_TOKEN_TO_BE_REPLACED 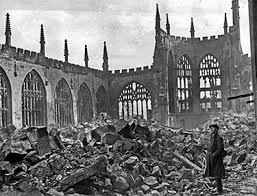 Crudely developed during the later stages of World War II, the SBO was a series of mass attacks from the air on both military and civilian targets. The idea was to destroy your enemy’s capacity to make war on you, and to shatter civilian morale.

Before the Second War started there was widespread belief that aircraft would always get through defences and destroy towns and their population. German air attacks on places like Guernica in Republican Spain appeared to confirm this belief, though the propaganda value of Guernica to the Republican government of Spain was priceless, especially when internationally renowned artists like Picasso painted their view of the attack. Sadly, Coventry, Bristol and Desden had no Picassos available to repeat the process when their moment came. 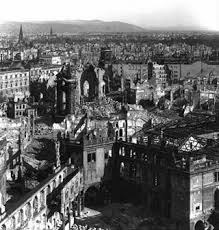 Yet, though this appears strange, neither Britain, Germany, France nor the Soviet Union possessed many heavy bombers in 1939, when the War began. Britain started building the 4-engined Lancaster immediately, but orders were not delivered until 1941.

SBO was first ordered by Hitler against Britain in 1940. In August’s daytime attacks the Luftwaffe lost so many aircraft that they quickly changed to night attacks on London and other large cities in what the English called the Blitz. This went on until May 1941, when Hitler started preparing his air forces for Operation Barbarossa (q.v.) against his erstwhile ally – Soviet Russia. By then around three million homes had been destroyed and more than 60,000 civilians killed in Britain, but Hitler had not planned for the British failure to lower their morale (it actually went up) or halt war production.

Now comes a really bizarre moment: the British air chiefs told the United States that despite the failure of the Bliz they planned to win the War by bombing alone! As the Americans were doubtful at this time whether they would enter the War anyway, this came as a surprise. As we know, Pearl Harbor in December 1941 was enough to make up their mind.

Meanwhile, British bombers were operating at night, as their enemy had done in 1940. The specific targets were arms factories, bridges over rivers, dams in the industrial Ruhr, and massed concentrations of enemy soldiers. But night-flying skills and instruments were inadequate and most of the bombing was atrociously inaccurate, as aerial photography showed.

Then Air Marshal Harris, known as ‘Bomber’, became chief of Bomber Command in 1942, and he promptly went for bigger targets – such as whole cities. He approved of ‘area bombing’ – what the German civilian population knew as ‘terror bombing’. Using the enormous four-engined Avro Lancaster, with a great range and a payload of up to six tons of bombs, he ordered a thousand-bomber raid on Cologne (Köln) in May, 1942, quickly followed by other similar raids on the industrial Ruhr. On 27 July 1943 special incendiary bombs started a fire-storm in Hamburg which is estimated to have killed approximately 50,000 people. Should Britain have lost the War, the first military leader accused of war crimes would have been ‘Bomber’ Harris, a mild man personally. But, the Americans said they disapproved of SBO (though they used it without compunction later); they preferred precision daylight bombing of specific (military) targets, but on 14th October 1943 two-thirds of their aircraft were shot down over Schweinfurt and they suspended bombing until enough fighter escorts could arrive.

The fighter escort they awaited turned out to be the Mustang (operating from December 1943) a fighter superior to anything the Germans could produce. The Mustang ate up the enemy fighter force and made it possible for American daylight bombing to resume in February 1944. The results were so spectacular that when France was invaded on D-Day (6 June, 1944) the Germans could hardly muster a single Messerschmidt to attempt defence.

Meanwhile the Royal Air Force had cut German steel production by 80% in the Ruhr, halving Germany’s overall production. The States continued attacking synthetic oil production plants, but there was a danger of aviation fuel (in Britain, the main base) running out and the bombing fell from 316,000 tons (!) to 17,000 tons in September.

The human loss due to ‘carpet’ bombing was huge, and was later firmly questioned. Between three-quarters of a million and one million German civilians (a conservative estimate surely) were killed in Allied bombing raids. When questioned on this, senior air-force personnel were not very apologetic and asked who had started the War. They frequently added that up till then around 100,000 aircraft crew had also been killed from British and American air bases.

When the US captured Japanese islands in the Pacific they were enabled to begin SBO on the mainland of Japan, reaching a terrible peak in 1945. The idea was to spread terror and this the Americans certainly did in Tokyo on 9 March of this year, when fully a quarter of the city’s mostly wooden buildings went up in flames, taking occupants with them. Between June 1945 and the end of the war fifty-five Japanese cities were attacked, each attack destroying half the built-up area in each town. Finally, when two atomic bombs were dropped on Hiroshima and Nagasaki the strategic bombing offensive ended.

A child’s guide to the Greek philosophers

I suppose that the Peloponnesian War (q.v.) was, shamefully, the downfall of the ancient Greek Empire. War had penetrated men’s minds and they did bad things. With Pericles as King of all those nation states, the Greeks seemed triumphant, master of the world, but the terrible sack of Melos was allowed, and the Greek ideal, embodied by Athens, was no longer splendid. It was at this worst time for Athens that the great philosophers appeared on the scene. END_OF_DOCUMENT_TOKEN_TO_BE_REPLACED

A Brigade section training; note the extreme youth of many of the volunteers / iwm.org.uk

Volunteers from countries foreign to Spain rushed from around the world to aid the republican cause during the Spanish Civil War (1936 – 1938). Contrary to popular literature’s view, the Brigades were not packed full of European and American playwrights, intellectuals and novelists. Most volunteers came from the working classes. Ernest Hemingway came, but as a war correspondent. Stephen Spender and George Orwell came, but were kept as far away from the front as possible, because the propaganda value of their possible capture to the Nationalist forces would have been great. Poets W.H. Auden and Christopher Isherwood watched from a safe distance, as indeed they did again, this time from California, during the Second World War. END_OF_DOCUMENT_TOKEN_TO_BE_REPLACED

Eugenio Pacelli was born in 1876, and was elected Pope in 1939. He came from a familyprominent for its loyal service to the Vatican. He was ordained priest in 1899 at twenty-three. By 1901 he was already entrenched in the Vatican administration. END_OF_DOCUMENT_TOKEN_TO_BE_REPLACED

END_OF_DOCUMENT_TOKEN_TO_BE_REPLACED

‘Adiós Princesa’: a review of the book published in Spanish in 2013

I have carefully read this paperbook book of nearly 300 pages, written in Spanish. The name of the author on the front cover is David Rocasolano. He is a lawyer by profession, and if he is in truth the author of this book then I suggest he changes his profession immediately to that of professional writer. Once begun, it is impossible to put the book down, as horror after horror is exposed in readable prose, composed without mercy either for its subjects or the reader.

The whole book is dedicated to a well-planned and even better timed attack on the following: Don Juan Carlos I, King of Spain; the wife of his son Felipe, Prince of Asturias, the ‘princess’ of the title – Letizia (actually a cousin of the author); the system of protocol in Spain; the Press in Spain; most of the television and radio news programmes in Spain; one of the sisters of the King and every courtier in sight. The Prince of Asturias escapes censure. He is one of the goodfellows. The blind sister of the King also escapes, because she is a Dear Lady and not in the least snobbish. The Queen of Spain also escapes without blemish.

I do not believe for one second that David Rocasolano is the actual author of this gripping and absorbing book. No provincial lawyer without any published literature to his name can write like this. The dialogue (though there is little) is worthy of Hemingway. The planning, the use of cynicism and sarcasm, the imagery, the detail, the literary hammer blows – this is not the work of an unpractised author. Someone has been there at David’s elbow, insinuating this, suggesting that, changing this, altering that – here is a literary master at work. Sorry David, your whole family has suffered tragedy after tragedy, and you have ended by separating yourself from them, which seems the ultimate low blow. But if you really did write this book, I congratulate you, though I may not agree with the book’s general trend. As a piece of literature, the book will enter the most illustrious sections of Spanish literature. I pray that a really decent translation into English will shortly become available.

In Dumas’s series of books about D’Artagnan, someone warns the hero about Richelieu and Milady: “Do not go into unlit streets, be wary of strangers, watch your back in taverns, your very life is in danger.” Do take this as good advice, David.

Lords Rampant: how the British nobility won’t lie down

Not very long ago Mr Blair and his henchmen decided that the Upper Chamber of Parliament, where matters of the day were discussed calmly instead of noisily and rudely, as in the Lower House, was obsolete, unnecessary, out-of-date and up for the chop. The House of Lords, as it was called, had benches packed with hereditary lords of every rank, plus many life peers (those who had earned a title but could not pass it on to heirs). The hereditary peers were, in ascending order of rank, barons, viscounts, earls, marquesses and dukes. Quite a lot of these were women, though only a few noble titles pass only in the female line. What they had in common was normally a good and ancient surname, and a tradition (how modernists hate this word) of involvement in politics, for good or bad. Some were sane and very serious; a few were insane but kept out of asylums, one assumes for the sake of the other inmates. END_OF_DOCUMENT_TOKEN_TO_BE_REPLACED