A history of Hungary & Austria/Hungary 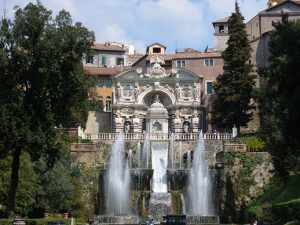 The first Marchese or marquess was Azzo d’Este (1205 – 1264), whose absolute authority seems to have been established by the last year of his life. The office of Signore or Lord was made hereditary during the time of his son, Obizzo, who annexed the territories of Modena and Reggio. Niccoló III, born 1383, brought peace and security to the area; his sons Leonello, born 1407, Borso, b. 1413, and Ercole, b. 1431 were mainly known as fervent patrons of the arts, as well as being scholarly students of the humanities. The daughters of Ercole, Isabella, b.1474 and Beatrice, b. 1475 continued this peaceful tradition. The first married Francisco Gonzaga (q.v.) of Mantua while the second married Lodovico Sforza (q.v.) of Milan, thus uniting three of the grandest (and richest) Italian families. END_OF_DOCUMENT_TOKEN_TO_BE_REPLACED

In February, 1945, the second ‘Big Three’ conference took place at Yalta in the Crimea. The first had been in Teheran in Persia. What was agreed at Yalta changed the face of Europe, prepared the ground for the Cold War, and put millions of ordinary people into a condition of near-slavery. The three major protagonists were the respective leaders of the United States, Great Britain, and Russia – Roosevelt, Churchill and Stalin. The first was dying slowly but certainly, the second was old and exhausted, and the third was younger, fitter, and unable to see any point of view that was not his. He was also a fully-qualified dictator. END_OF_DOCUMENT_TOKEN_TO_BE_REPLACED

Though it has been put into the shadow by the Franco-Prussian War, this was one of the most important conflicts in the 19th century, because it overturned the balance of power, at least in Central Europe. The gains achieved by Prussia made her richer and better-populated than all the other Germanic states combined. It became obvious to interested observers that an eventual unification of Germany, under the leadership of Prussia, was a certain bet for the future. END_OF_DOCUMENT_TOKEN_TO_BE_REPLACED

The second took place in April and May 1915, and was notable for the first use of poison gas by the Kaiser’s armies. This gas was chlorine-based, and gas masks on the heads of allied soldiers were also seen for the first time. They did not work as efficiently as the boffins had predicted. Thousands of troops had to be invalided back into France and Britain, suffering from the gas, which left them crippled in mind and body. In terms of strategy, this second battle at Ypres forced the British to shorten their line of defence in what was called ‘The Ypres Salient’. END_OF_DOCUMENT_TOKEN_TO_BE_REPLACED

One of the great Hungarian heroes, about whom much fact and fiction has been mixed, Kossuth was born in 1802. His family was poor but noble. He was part Slovak, part ethnic German. Well educated, he worked as a jobbing lawyer for a while, before entering politics as a deputy at the Diet (Parliament) of Pressburg.

He also published pamphlets that could not by law be published, so he had them transcribed and widely circulated. It was said of him at the time that it would be difficult to stop him in any activity he chose to follow, but the pamphlets got him into jail. After freedom came in 1840 he was appointed editor of the polkitical journal, published twice-weekly called Pesti Hirlap – an extremely liberal paper with perhaps too much of a chauvinistic approach. END_OF_DOCUMENT_TOKEN_TO_BE_REPLACED