Though it has been put into the shadow by the Franco-Prussian War, this was one of the most important conflicts in the 19th century, because it overturned the balance of power, at least in Central Europe. The gains achieved by Prussia made her richer and better-populated than all the other Germanic states combined. It became obvious to interested observers that an eventual unification of Germany, under the leadership of Prussia, was a certain bet for the future.

The essential planning and orchestration of this war was made by von Bismarck, as one would expect, and it was skilful and thoughtful, as one would also expect. First he dealt with Napoleon III of France by hinting that France might receive territory on the river Rhine if Prussia expanded in Germany – and France remained neutral. Then he made a secret treaty with Italy by promising the gift of Venetia. This ensured that Austria would be forced to fight on two fronts instead of one. 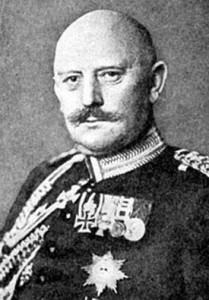 Austria to a certain extent was to blame for the War, for her bullying insistance on leadership of the German Federation. Bismarck only had to insist that Austrian dominance would not be tolerated, for war to break out. Most other German states expected a long drawn-out war with Austria the winner, and announced they would support Austria; but the war was over in seven weeks. Austria only managed to defeat the Italians in one land battle and one at sea. Bismarck’s brilliant general von Moltke occupied Saxony, Hesse-Cassel and Hanover in just three days, which kept these three pro-Austrian Teutonic states out of action. Austria herself was soundly thrashed at the Battle of Königgrätz in Bohemia. A hasty peace was made at Prague in August, 1866.

Austria was thrown out of Germany and Italy, and forced to concede equality to Hungary in the Ausgleich. She could only maintain power in the Balkans, where her expansionist tendencies helped lead Europe into the Great War in 1914. Bismarck’s personal power and prestige surged upwards, especially when the Diet passed an Indemnity Act which made legal the collection of taxes,and the re-organization of the army. Bismarck would have executed the latter even if the Diet had not legalized it. The Liberal Party in Germany never recovered from the victories of Bismarck and his authoritarianism in the constitutional debate.