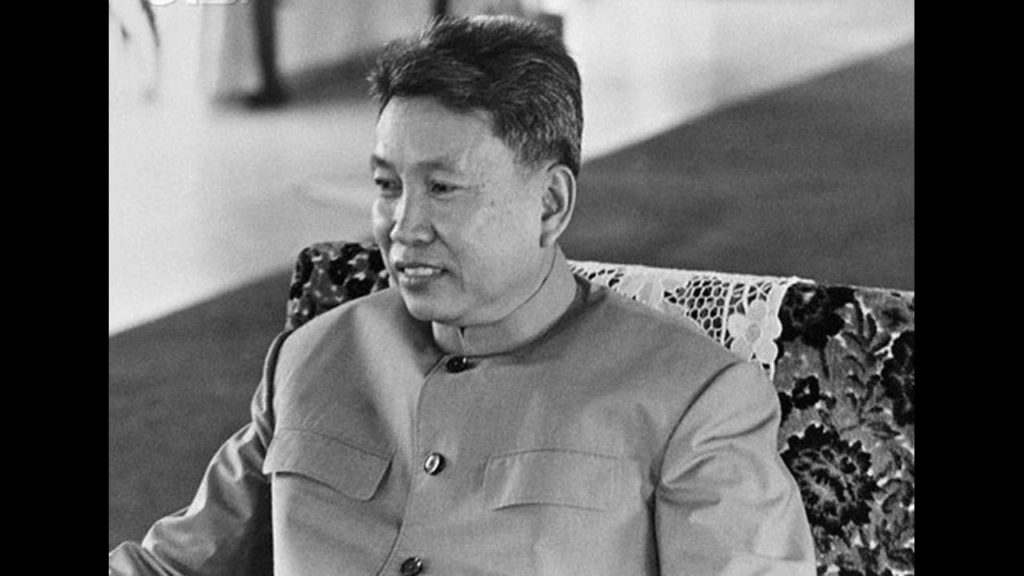 In 1970, serious trouble boiled up again when the Prince Sihanouk was knocked off the throne by a Cambodian communist guerilla force called Khmer Rouge. This brutal, well-organised group was inevitably opposed to an American invasion of Eastern Cambodia, and rapidly gained control of the entire country by 1975. The ‘government’ was led by a man called Pol Pot, noticeably insane, who announced the dramatic transformation of his country into what he called ‘Democratic Kampuchea’. His aim was to move the masses out of urban areas into the countryside, where they could be usefully employed in tilling the soil, if they could find some, and could irrigate it if there was nearby water. To control the new agricultural population Pol Pot invented thousands of new ‘agricultural cooperatives’ managed by his specially trained uncivil servants, while at the same time just as many ‘bougeois elements’ (previous owners of land) were eliminated. END_OF_DOCUMENT_TOKEN_TO_BE_REPLACED

Okinawa is a Japanese island some sixty miles long and very narrow – at certain strategic points only two or three miles wide. But it could prove to be the springboard for a massive invasion of the enemy mainland. It is the largest island of the Ryukyu archipelago, and it was that there that the worst, hardest and bloodiest battles of the Pacific War took place between the beginning of April and 22 June, 1945. The Japanese had carefully built and preserved defence lines already built and manned, and had sworn to their Emperor that their resistance would be fanatical. The latest artillery was concealed behind camouflage, and munitions were ample. END_OF_DOCUMENT_TOKEN_TO_BE_REPLACED

In February, 1945, the second ‘Big Three’ conference took place at Yalta in the Crimea. The first had been in Teheran in Persia. What was agreed at Yalta changed the face of Europe, prepared the ground for the Cold War, and put millions of ordinary people into a condition of near-slavery. The three major protagonists were the respective leaders of the United States, Great Britain, and Russia – Roosevelt, Churchill and Stalin. The first was dying slowly but certainly, the second was old and exhausted, and the third was younger, fitter, and unable to see any point of view that was not his. He was also a fully-qualified dictator. END_OF_DOCUMENT_TOKEN_TO_BE_REPLACED

1947/48 saw the biggest break-up in the disgraceful dismemberment of the British Empire, whose most important ‘colony’ was India. Lord Mountbatten (q.v.) was sent to supervise the partition of India. At this time Kashmir was mostly populated with Muslims, though ruled by Hindus – lunacy on a grand scale. In October there was a Muslim-orchestrated uprising in the west, naturally supported across the border by Pakistan. Kashmir howled for help from India, and got some; but Indian troops would only act in exchange for Kashmir becoming part of the Indian Union. END_OF_DOCUMENT_TOKEN_TO_BE_REPLACED

It became obvious that a few thousand British officials could not control tens of millions of Indians (305 million in 1921, 400 million in 1941) without the cooperation of the natural (and hereditary) leaders in the princely states, which meant 30% of the continent with around a quarter of the population. The British therefore awarded honours and restricted powers to the princes, while at the same time impressing them with British strength at the mightily staged Durbars. END_OF_DOCUMENT_TOKEN_TO_BE_REPLACED

Matthew Galbraith Perry was born into the American ruling class in 1794. He entered the Navy in his teens and was soon a naval officer. It was as a Commodore (a rank with meaning in the American navy, not so in the Royal Navy) that Perry entered Tokyo Bay fifty-nine years later in July 1853, in command of four fighting ships, two under sail and two powered by the new steam engines. Japan had been closed to foreign conact for more than two hundred years because the Tokugawa Shogunate feared foreign trading would allow rebellious warlords to become rich, allowing them to buy foreign arms. Commodore Perry’s brief from his president had clarified that the US wanted to extend and expand her trade in the Far East, especially coal supplies from Japan for US ships trading with China. END_OF_DOCUMENT_TOKEN_TO_BE_REPLACED 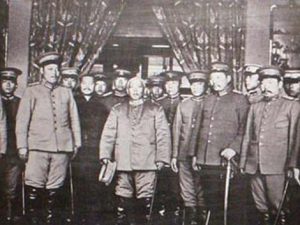 These provincial military self-appointed rulers were one of the collateral results of the Taipan Revolt (q.v.). Their power base was a private army, which each lord raised and maintained. Government of China (a vast and over-populated nation) was therefore partially in the armoured hands of these gentlemen from the beginning of the 20th century until the advent of Chiang Kai-shek (Jeng Jieshi) in 1928. Until Jeng imposed restraint and a semblance of disciplined unity, dozens of zones were ruled by warlords, not always kindly, not always just, though there were exceptions. END_OF_DOCUMENT_TOKEN_TO_BE_REPLACED 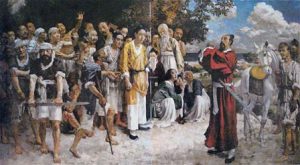 What happened was a series of peasants’ revolts lasting twenty years from 1850. Part of the North China Plain, between the Huai and Yellow rivers, came under the control of the Nian rebels. In Yunnan the Chinese Muslim population rose up between 1862 – 1873, and the Miao natives revolted in the Kweichow mountains from 1854 – 72. END_OF_DOCUMENT_TOKEN_TO_BE_REPLACED 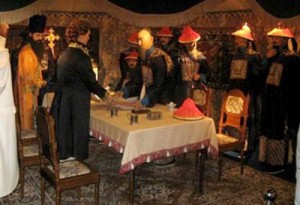 The Japanese, as industrious as ever, had made great strides in the design and construction of these floating airfields, and at Pearl Harbor they made full use of them. Four hundred bombers and fighters were launched from the six carriers used in the assault. Surprise too was an essential element, as Japan had not declared war on the United States, though everyone from the President in Washington to the Texan cowpokes knew the two countries were on a war footing, and that Japan had joined the Axis. END_OF_DOCUMENT_TOKEN_TO_BE_REPLACED