In 1931 this Statute gave freedom to the Dominions. Following the Great War these Dominions had been accepted as national states in their own right, though they were still part of the Empire. They joined the ill-fated League of Nations (q.v.) but it was seen (by them) as if their ‘freedom’ was still limited. END_OF_DOCUMENT_TOKEN_TO_BE_REPLACED

The Indian Army served outside India as well, and had a deserved reputation for ferocity and good discipline; it remained (at least until the Sepoy Rebellion) a staunch and integral part of the Pax Britannica. It creators were locally found guards employed in the protection of the East India Company, known as sepoys. END_OF_DOCUMENT_TOKEN_TO_BE_REPLACED 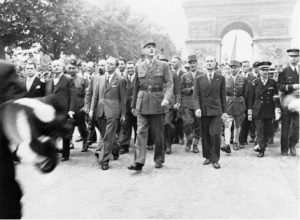 Germany attacked France in May, 1940. 136 German divisions faced 125 British, French and Belgian ones. The Germans had over two thousand tanks, but even their commander admitted half were obsolete. The Allies had a little more than three thousand six hundred tanks, among which the French armour was better than anything the Germans had. But they had many more aircraft. Only the French, with their thousand aeroplanes, could provide much opposition. 400 British fighters, mostly Hawker Hurricanes were based in France. The French seemed paralysed by ther audacity and skill of Guderian’s Panzer tanks and troops, and watched with their mouths open as the Panzers crossed the Meuse,, open a fifty-mile gap in the Allied front, and then raced along the valley of the Somme towards the channel (q.v.). By 20 May they had got there. Gamelin, the French commander, seemed immovable and was replaced by a seventy-three year old – Weygand, who had been sitting in Syria. By 28 May the Germans were in Calais, cutting off the French, British and Belgian forces in the north from the remainder of French forces. The Dutch and the Belgians surrendered. The British got to Dunkirk where, miraculously, they evacuated nearly four hundred thousand troops back to English shores, unfortunately leaving tanks and ammunition behind, as there was not sufficient time to load them on to the Royal Navy ships sent, along with hundreds of small motor and sail craft which had also crossed the Channel to help. Meanwhile the French retreated to the Loire, thus separating themselves from those still holding the Maginot line, which Guderian had contemptuously avoided. In June two million Parisians left their homes and scuttled south, joining the six million who had already fled from northern France and Belgium. Weygand was replaced by Marshall Petain, who instantly accepted German surrender terms. The Atlantic coast and all Northern France were to be occupied and controlled by German forces. The rest of the country would be governed, hand in glove with the Germans, by Petain, in what became known as Vichy France. The French Army had been beaten in six weeks. END_OF_DOCUMENT_TOKEN_TO_BE_REPLACED

This was the real turning point in the Second World War, although it came much later than it should have done, due mainly to inappropriate weather conditions for a sea-based landing. The British Isles were undergoing one of those violent climate changes to which we are now more accustomed. It was summertime, but Britain’s east coast ports and resorts were lashed by wind and near freezing rain. The sea between British and French coasts choppy and crossed with currents. The cold at sea was appalling, as if the breezes were blowing directly from the Russian steppes. Only the tempers of the soldiers, sailors and airmen waiting, waiting, and still waiting in the barracks, manor houses and homes to which they had been invited by English people in the villages and towns of the south-east, were hot and getting hotter. END_OF_DOCUMENT_TOKEN_TO_BE_REPLACED

The name of the longest railway in the world may confuse. It is transcontinental, not a railroad running along the western or Pacific coast of Canada. Work began in 1880, under a Conservative government led by Sir John Macdonald. In order to persuade capitalists to invest in it, Macdonald offered potential investors millions of acres of fertile arable land running alongside the proposed tracks. He also offered subsidies and tax exemption. END_OF_DOCUMENT_TOKEN_TO_BE_REPLACED

Winston Churchill was First Lord of the Admiralty at thirty-nine years of age; he was convinced that the military stalemate on the Western Front would not be broken without decisive action somewhere else. Gallipoli is the gateway to the Dardanelles, and therefore far enough away from the hopeless bloodbath in the Flanders mud. British and French battle fleets would destroy the Dardanelles defences; troops would then secure the Gallipoli peninsula. After this was successfully concluded the land forces would move on to Constantinople, later known as Istanbul. It was reckoned that with the fall of Turkey’s capital she would withdraw from the fighting. END_OF_DOCUMENT_TOKEN_TO_BE_REPLACED

Transportation was introduced as a means of banishing from Britain convicted felons guilty of most ‘petty’ offences, which could mean anything from stealing a loaf of bread or tearing down a fence put up by a landowner. The new colonies in America were considered ideal and a suitably long way from the motherland, and organised transportation to America started in 1597 and continued through the 17th and 18th century, until stopped by the American Revolution or War of Independence. Naturally the established and prospering settlers in the thirteen colonies did not wish to see convicted criminals (who could be of any age or sex) in their settlements. END_OF_DOCUMENT_TOKEN_TO_BE_REPLACED

The struggle for independence: Rhodesia

It would seem clear that Cataluña will, by one means or another, free herself from Spain, of which she has always been an integral part. All the signs are there; Catalan politicians speak in Catalan on national TV, so the rest of the nation must either know Catalan, or remain ignorant of what is being said. The President of Cataluña, Mr Artur Más, talks of his region being ‘a nation within a nation’, as if that were possible. At meetings of Spanish regional leaders you can be sure of his absence. There are weekly demonstrations in Barcelona and other key cities designed to show that all Catalan peoples support the idea of unilateral independence – that is to say, total independence without consulting or listening to the national government in Madrid. Catalans speaking with persons from other nations – such as Spain – claim the national government steals from Catalan pockets. Let us examine what happened some nearly fifty years ago in Africa, when a British colony decided to break the chains with Britain, rather in the style of thirteen American colonies across the Atlantic two hundred years before. END_OF_DOCUMENT_TOKEN_TO_BE_REPLACED

Why ‘curious’? Because the first was agreed between Britain and Germany only fourteen years before the outbreak of a world war, the first of its kind.  And the second was signed only four years before the next one. END_OF_DOCUMENT_TOKEN_TO_BE_REPLACED

Lord Randolph H.S. Churchill was born in 1849, the third son of the then Duke of Marlborough. In character more similar to his grandson Randolph than his son Winston, he got into the House of Commons for the family borough (and almost fief) of Woodstock in 1874. I say ‘fief’ because near Woodstock stands Blenheim Palace, presented to John Churchill Ist Duke of Marlborough by a grateful Queen and Nation after his military successes. The building was designed by a retired playwright called John Vanbrugh, and the massive park was designed by Vanbrugh himself aided by Queen Anne’s gardener Henry Wise, with later additions by ‘Capability’ Brown. END_OF_DOCUMENT_TOKEN_TO_BE_REPLACED