A history of Australia 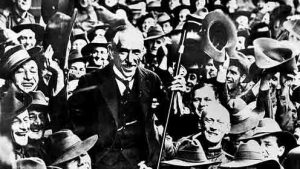 Towards the end of the Victorian era, when neither statesmen or dustmen had yet heard of political correctitude, Australia began the unenviable task of preventing the immigration of non-Europeans. In the 1850s/1860s waves of Chinese and South Pacific islanders had come to Australia because of a dearth of labour in the Queensland sugar farms, but trade unions had been invented in the mother country, and were becoming rife in the Dominions too. They objected, as dirt cheap labour was seen as a threat to their members’ living standards. END_OF_DOCUMENT_TOKEN_TO_BE_REPLACED

These days the word strikes a sour note, arousing images of rough settlements, starving ‘piccaninies’, whips, shackles, thoughtless government from a distance of thousdands of miles etc. If there are any ‘colonies’ left after the post-war rush to be rid of them I think it is because the ‘colonists’ prefer it that way. 90% of colonies which achieved independence have suffered under bad or atrocious rule since being ‘freed’, with the possible exception of the United States, and even there half the settlers in the Thirteen Colonies claimed they did not wish for independence from British rule, and after 1776 sold up lock, stock and barrel and moved to Canada, where they were welcomed. END_OF_DOCUMENT_TOKEN_TO_BE_REPLACED

Winston Churchill was First Lord of the Admiralty at thirty-nine years of age; he was convinced that the military stalemate on the Western Front would not be broken without decisive action somewhere else. Gallipoli is the gateway to the Dardanelles, and therefore far enough away from the hopeless bloodbath in the Flanders mud. British and French battle fleets would destroy the Dardanelles defences; troops would then secure the Gallipoli peninsula. After this was successfully concluded the land forces would move on to Constantinople, later known as Istanbul. It was reckoned that with the fall of Turkey’s capital she would withdraw from the fighting. END_OF_DOCUMENT_TOKEN_TO_BE_REPLACED

Transportation was introduced as a means of banishing from Britain convicted felons guilty of most ‘petty’ offences, which could mean anything from stealing a loaf of bread or tearing down a fence put up by a landowner. The new colonies in America were considered ideal and a suitably long way from the motherland, and organised transportation to America started in 1597 and continued through the 17th and 18th century, until stopped by the American Revolution or War of Independence. Naturally the established and prospering settlers in the thirteen colonies did not wish to see convicted criminals (who could be of any age or sex) in their settlements. END_OF_DOCUMENT_TOKEN_TO_BE_REPLACED