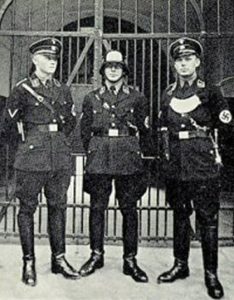 The Schützstaffel was a more or less elite special force created by the National Socialist Party in 1925 for the ‘special protection’ of Adolf Hitler. The name means ‘defence group’, and the significance of its actions is that the force was hated even more within Germany than among her enemies. At first, the SS was a small part of the SA, or Sturm Abteilung, a much bigger Nazi paramilitary organisation, formed to break up dissident political meetings and distribute Nazi propaganda. The SA had played a very big part in the ascent of Hitler to power; its leader was an old-time friend of Hitler’s called Ernst Rohm, but when the SA became, according to the Fuhrer and his associates, too big for its boots, it was dealt with by simply murdering its leaders, including Hitler’s old friend. Most of the summary executions were carried out by the SS.

Himmler was put in charge of the SS in 1929, and he built it up into a disciplined elite and elitist force, choosing savage elements from German miltary forces and the police, who were put into a specially designed black uniform. Before Himmler took over there were little more than 200 members of the SS, but by 1933, when Hitler became Chancellor, there were 50,000, and 240,000 by 1939, when the II World War broke out.

One of the reasons why the SS was so hated by Germans, including German soldiers, is that it was responsible only to Hitler and Himmler, making it like a loose cannon. Himmler, using the SS, set up the first punishment or concentration camp at Dachau (near Munich) for the imprisonment, later death, of political prisoners. Wearing their ‘Death’s Head’ insignia, the SS detachments became the very centre of the Waffen SS, three divisions of them in 1939 and thirty-five by 1945. These detachments fought alonside the regular army, much to the dislike of regular soldiers, though the latter were careful not to show their discontent. It has been estimated that by the time Hitler invaded Russia, breaking his peace pact with Stalin, there were nearly a million members of the SS. In 1941 these Einsatzgruppen were attached to each regular division, whether they liked it or not, to terrorize the territory conquered, by killing all partisans, of whatever age or sex, and selecting hostages, regularly hanged or shot pour encourager les autres.When the tide of war at last turned, it is a recorded fact that Russian and Allied troops were encouraged by their generals not to treat captured SS units as prisoners of war, but eliminate them without mercy. Such is the reputation, well deserved, that the SS had by the month of invasion in 1944. It is also a fact that some regular army units, unfortunately wearing their traditional black regimental uniforms, were treated, when captured, as if they were SS. To the Allies, any German wearing black, even if he belonged to a famous tank regiment and had nothing to do with the SS, was destined for a not necessarily quick death if caught.

Dictators since Hitler have tried to emulate the SS, without notable success, though Doctor Duvalier managed to copy SS methods with his Tontons Macoute.