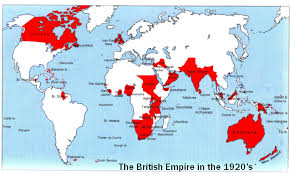 The Empire was established over three centuries, and came about because of commercial and political motives. Enemies of colonial empires will disagree; they will shout that the motives were greed and expansionism. Whatever, the Empire was at its height in the late 19th and early 20th centuries comprising about one quarter of the world’s area and population.

Superiority over Dutch, Portuguese, French, Belgian and Spanish rivals was maintained by command of the seas. Dominance within the Empire was sustained through flexibility of rule, a regular civil service, and comparatively efficient colonial administration.

Nationalist agitation by power groups with ‘liberal’ intentions, especially the Labour Party which emphasised the economic disparities, forced Britain to concede independence to those colonies that still remained following World War II. The principal difference between Britain’s empire and those that rivalled it was that the empire was ruled via a usually benevolent London, thus allowing government – within and for the benefit of – the colony. No attempt was made (after the disaster with the Thirteen American Colonies q.v.) to rule a place that might be fourteen thousand miles from the River Thames. British colonies succeeded or failed depending on their own governorship. When the African colonies were made independent, for example, there was little or no starvation; hospitals, schools and universities had been built and were functioning, and the tribes had learned how to co-exist with each other. It would be fearful to compare that situation with the present day, however anti-colonialist the reader is.

After independence, many former colonies chose to remain within the Commonwealth of Nations, though there are notable exceptions.

Britain still has thirteen dependent territories including Gibraltar, the Falkland Islands, and Bermuda, which rejected independence after a referendum in 1995. Hong Kong was given back to China according to treaty, in 1997. Queen Elizabeth II consented to the termination of constitutional links between Britain and Canada in 1982, and Britain and Australia in 1986. Fifteen Commonwealth members (including Great Britain of course) recognise the British monarch as Head of State.

The British Empire reached its peak after the First World War, when German and Ottoman mandates were acquired. Over 600 million people were ‘ruled’ from London.