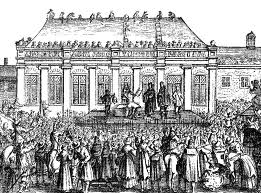 Execution of Charles I

The history of Great Britain can produce only one genuine civil war. Those students who think that the Wars of the Roses (see also in Toda Historia) was a civil war are quite wrong. That series of battles which saw dethroning of monarchs, usurpation of the throne and the death of thousands of soldiers, was strictly a private struggle between warlike landlords – warlords if you like – to gain the crown by right of battle (and the use of cunning and subterfuge). Civilians, as such, busy in the villages and on the farms, were virtually untouched by the Wars of the Roses, though the people watched with horror as the flower of English chivilary cut each other to pieces.

As you might have read in Toda Historia, the best similarity in history one can find to the Wars of the Roses is the monotonous and bloody conflicts between the gangs in Chicago, New York and Miami during the Prohibition Era in the United States. From that maelstrom emerged a ‘King’, Al Capone, though not for long. Capone was superceded and succeeded by a number of other names that will for ever be ignoble in American history.

The English Civil War was an armed struggle between supporters of proud King Charles I, always known in popular terms as the ‘Cavaliers’, and those citizens who preferred Parliament, especially including the parliamentarians themselves, naturally. These were known as ‘Roundheads’.

The Wars erupted in 1642 and continued (with a sort of interval) until 1649 with the judicial regicide of the crowned and annointed King, second of the Stuart Dynasty.
The English Civil War arose from constitutional, religious and economic differences of opinion between Charles I, and elected members of what was called ‘The Long Parliament’. Of these the most decisive factor was without doubt religion, because the determined attempts of Archbishop Laud to impose liturgical uniformity had been severely criticised by a surprisingly substantial number of clergymen, gentry, craftsmen and the ‘liberals’ of the epoch.

All sections of society were affected, though many on both sides wanted peace not war. This is why, when it happened, it was a real civil war, often drastically dividing whole families, due to their difference in allegiance.

Parliament was of course strongest in London, and when the conflict broke out London was the King’s first target for capture. Unfortunately for him, his first engagement with his enemy was at Edgehill, near Banbury. He was defeated and took refuge in nearby Oxford, which then became his battle HQ. The King’s plan in 1643 was to combine Cavalier armies from Oxford, Newcastle in the North, and armed followers from the south-west. They would then march on London, but this did not work either, perhaps through lack of leadership at all levels. Anyway, the march on London was not realised.

The Parliamentarians had not been idle. With ‘The Solemn League and Covenant’ they secured Scottish assistance, and defeated the King’s forces again at Marston Moor (1644). Charles got away, and tried once more to march on London, but was frustrated at the battle of Newbury. The Parliamentarians had by now been re-organised (chiefly by a pockmarked gentleman from Cambridgeshire called Oliver Cromwell) into ‘The New Model Army’, a band of disciplined ruffians who particularly liked destroying beautiful houses if they happened to belong to anyone they considered pro-monarchy or anti-parliament.

There was another crushing defeat for the Cavaliers at Naseby (1645). King Charles was forced to negotiate at Uxbridge, but refused all conditions of surrender. He got away and made (stupidly, judging by all Scottish history) for Scotland and ‘safety’. He was at Newark in 1646.

There was now a brief interval, employed cleverly by Cromwell in training more troops and settling differences between his generals – while the King wandered vaguely about trying to get the Scots to keep their promises or make up their mind (vain hope). He escaped to the Isle of Wight, and raised hopeless Cavalier risings in Wales, Essex and Kent. The Scots at last decided to support the King, and were punished for this presumption by Cromwell, at Preston.

Charles had always believed in ‘the Divine Right of Kings’, an abstruse idea that monarchs were appointed by God, but Parliament, having imprisoned him in a castle in the Isle of Wight, brought him to London, where he stood trial for treason and being offensive to politicians. The sentence of death placed on the King was known as ‘Pride’s Purge’. His head was cut off at the command of a Court which (they claimed) was constitutionally unable to listen to him. It was a cold morning at Whitehall, and the monarch asked for an extra cloak before he was led out to the scaffold, because he did not wish to shiver, in case the silent crowd of thousands who had come to see their King beheaded should think he was trembling.

Charles had been over-proud, foolish, vain and unthinking. His son, however, who had escaped via romantic adventures to France and Flanders, returned later as Charles II, sometimes known strangely enough (as he suffered from melancholy) as ‘The Merry Monarch.