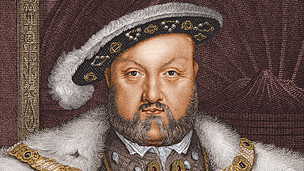 Taken from the point of view of their victims, Henry VIII of England was (almost) the equal of Ivan the Terrible of Russia (1530 – 84). Both had a merciless way with opponents. Both had their closest confidants and advisors killed. Both are considered by many of their countrymen as great and powerful monarchs of whom one should be proud.

Henry was born in Greenwich, London in June 1491. As a young man he excelled in sports and music, spoke and wrote in French, Latin and English. He and friends invented the game of royal tennis which evolved into Lawn Tennis within four hundred years. He succeeded to the English throne at eighteen, after the death of his father, first of the Tudor dynasty, who had won it in battle against the crowned and annointed Plantagenet king Richard III.

The early part of Henry’s reign was marked by the ascent of a commoner called Thomas Wolsey; the ascent of this son of an Ipswich butcher was meteoric, and planned to be so by Wolsey himself; he caught the ear of the young king, and stayed as his closest advisor until Henry’s desire to be rid of his Spanish first wife became too complex for Wolsey to deal with.

One of the riskiest moves in the Tudor epoch any courtier could make was to cause the king to think you were not entirely in agreement with him. To the challenged mind of Henry VIII, rather like the similar mind of an American President at the beginning of the twenty-first century, if you were not with him you were against him. In the sixteenth century, this was fatal.

Despite Henry’s knowing that Wolsey had devoted his life as courtier, Chancellor and Cardinal to Henry’s best interests, he had him arrested when he failed to persuade the Pope to annul the marriage with Katherine of Aragon. The fate of all traitors, execution in one form or another, was certain, but Wolsey escaped trial by dying just in time. His successor with the Royal Seal was Thomas More.

More was cleverer than anybody, had not used his position, as had Wolsey, to enrich himself, but it was not enough. He failed to break marriage seals between Henry and Catherine too, and paid the price – beheading. He was replaced by Thomas Cromwell (son of a blacksmith) a hardy, harsh and probably wicked lawyer who had also sprung, like Wolsey, from the lower classes. Cromwell solved Henry’s marital problem, encouraging the marriage with Anne Boleyn, and became Henry’s ‘little puppy dog’. He did it by fostering a policy of partial, finally complete independence from Papal authority. In 1534 and with the Act of Supremacy, Henry VIII assumed total control over the English Church, later called The Church of England or The Anglican Communion. Henry married Boleyn, but she could not give him the son he craved. She did however give him (and England) the future Elizabeth I. Meanwhile Henry’s first wife had produced the religiously inspired Mary Tudor, and the less said about that poor woman the better. She is best remembered for burning heretics, losing Calais for the English, and suffering appalling headaches all her comparatively short life.

The next few years were devoted to consolidating Henry’s position and the relentless acquisition of monasteries, monastery land and monastic riches known as The Reformation. Abbotts or Bishops daring to confront him were killed. Henry saw to the death of more than fifty men and women, including Thomas More, Thomas Cromwell his little puppy (d.1540) and Henry’s second wife, Anne. Edward Stafford, Duke of Buckingham (d.1521); George Boleyn and four other young men accused of illicitly ‘knowing’ Anne Boleyn (d.1536); Abbotts Richard Whiting, Hugh Cooke and Thomas Beche (1539), Priors John Haughton, Robert Laurence, Augustine Webster, monks Sebastian Newdigate, William Exner and Humphrey Middlemore, as well as Bishop John Fisher were all killed for refusing to hand over their monastery lands and buildings in 1535; Ten more monks  from The Charterhouse suffered the same fate in 1537. The last magnate to be executed was Henry Howard, Earl of Surrey, son of the Duke of Norfolk, accused of treachery. His father was accused at the same time, presumably because he was his father. Norfolk only escaped execution because Henry died just in time.

The king then married pathetic little Jane Seymour (proposed by the Duke of Norfolk, a schemer), and it is said Henry loved Jane Seymour very much, but she died giving birth to a son. A son! At last a son – but Edward VI would not reach twenty before dying, which meant there was still no male heir for Henry. He married and divorced ‘The Flemish Mare’ Anne of Cleves in a matter of days and fell for yet another relative of the scheming Duke of Norfolk, Catherine Howard. They were married but the young woman preferred the mortally dangerous practice of sleeping with other men at the Court. She was found out and naturally beheaded. Hers is one of the many ghosts regularly seen at Hampton Court.

Henry married as his sixth wife Catherine Parr. She was a clever woman, patron of the clergy, arts and education. She founded Well Grammar School in Suffolk. She was adept at nursing her over-weight, half-mad, permanently sick but preternaturally dangerous husband. Henry built navies, tried to come to agreement with Francis, the king of France at a gorgeously expensive meeting on French soil called afterwards ‘The Field of the Cloth of Gold’. That failed too. Henry suffered from gout, venereal diseases and various mental disorders that would be given names in later centuries. He died a large, shambling wreck, unshriven because he had been excommunicated by an angry Pope. It was January, 1547, and his son Edward was nine. Henry had not bothered to establish proper arrangements for his rule, and when the boy soon died attempts were made to put poor Jane Grey on the throne. These inevitably failed and Henry’s mentally-challenged and headache-prone daughter Mary became Queen, mercifully for an entirely dreadful five years. The reign started with her killing little Jane Grey and her husband: he was eighteen, she not yet seventeen.

Then, at last, the only decent Tudor became monarch, probably England’s greatest though it is easily seen by examining her biographies that Elizabeth was a Tudor to her fingertips.