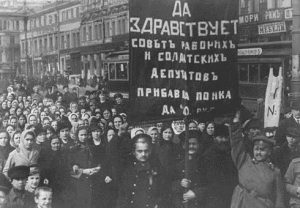 It is easy enough to say that the origin of the Revolution in Russia was mainly due to the unpopularity of the Tsar; but that would preclude other, deeper origins. The Great War had demoralized, decentralized and depopulated this huge country, a state always prepared to send more young men to be killed in battle even when mass slaughter was not required for reasons of strategy. Russian losses (dead, wounded or captured) during the great conflict had been more than half of those conscripted, perhaps fifteen million men. The war had to be paid for and the Russian government did this by the unintelligent method of printing more money, which in turn produced massive inflation. Prices of staple food supplies had quadrupled between 1914 and 1916. The serfs would not sell their grain, because there was nothing in the shops to buy with whatever cash they could obtain. Peasants therefore gave the grain to their animals, so animals got more grain than townspeople or the army. There were more strikes, because the average worker had noted his purchasing power in decline.

Tsar Nicholas II had taken personal command of the armed forces in 1915 – a crass mistake as he knew nothing of war strategy or fighting, though he wore a uniform. He was always blamed by his people for disastrous defeats, and left the running of the government to his wife the Tsarina, who in turn was dominated by the sinister Rasputin. In barely three years Russia saw four prime ministers, six ministers of internal affairs, three foreign ministers and three war ministers. To foreign observers it seemed like a game of musical chairs.

To his discredit Nicholas remained unconcerned, believing in himself, his aura as Tsar, and the unimaginable size of Russia herself, but conservative groups within the royal family and the nobility saw the need for a change. The monarch would have to go. A coup d’état would be welcome. It seems that the only people who did not see the viability of a revolution at the beginning of February 1917 were the growing numbers of revolutionaries. One month before, Lenin himself remarked that those of the older generation would not see any decisive revolutionary battles.

But, on 23 February, women in St. Petersberg massed in the streets demanding bread, calling on factory workers to join them, which they did, and on the following day between 100,000 and 200,000 workers were on strike. Banners were waved blaming the Tsar for all Russia’s ills. Demands were made for his immediate abdication, but death threats did not at this time appear. Bolsheviks, Mensheviks and other Socialist revolutionaries did appear however, though most of their leaders were still in exile somewhere abroad. By 25 February the strike was nearly general and St. Petersberg paralysed. On the 26th troops fired into the gathering crowds of discontents, but the next day mutinied when ordered to shoot to kill. By March 1 the entire garrison had joined the strikes. The Revolution came about because the army had revolted too, not because the Tsar was weak and indecisive. The Cabinet resigned on the 27th and a Provisional Government was set up.

Nicholas II abdicated on March 2, feeling he had been deceived by the government and ‘his’ people. It was the end of the Romanov dynasty, and the beginning of immeasurable movements which would change Russia, challenge the rest of the world, and introduce totalitarian control of an entire people for seventy-two years.

In September rumours were spread that the Provisional Government was going to leave Petrograd to the slowly advancing Germans, and move itself to Moscow. The prime minister at this time was Kerensky, who knew all about Bolshevik plans for a total revolution but still did not act decisively. A ‘Congress of Soviets’ met on the evening of the 25th, and the Winter Palace, guarded bravely by a female battalion and some army cadets soon fell to the revolutionaries, but the October Revolution was not a full-scale uprising as the February Revolution had been, and there was little bloodshed. Trotsky announced that only a few thousand workers were involved, perhaps 5% of the workers and soldiers in Petrograd.

Life carried on the city, shops were open, and public transport was working. Even theatres and restaurants (for those who could afford them) were open. The population thought that the Bolsheviks were hopelessly divided, cut off from the rest of the revolutionary movement, and would not survive.

But, the October Revolution was not the end of the Bolsheviks’ revolution but merely the beginning; no-one knew what kind of government would emerge from the chaos. The revolution was made in the name of the Soviets, but the Petrograd Soviet and the ‘Congress of Soviets’ had not taken part. The Bolsheviks themselves thought that power would pass by logic, or perhaps by magic to the Soviets, and that Russia would be ruled by a government of mixed Socialist parties. Then Lenin announced that he had created something new – the Council of People’s Commissars (all Bolsheviks) which would form the new government. Moderates complained, claiming that such a purely Bolshevik government could only maintain power by the use of terror. The bravest among them said they would not tolerate such a monstrosity. Some of the Commissars resigned but Lenin never lost his authority, and the idea of a coalition of Socialist parties was thrust aside. 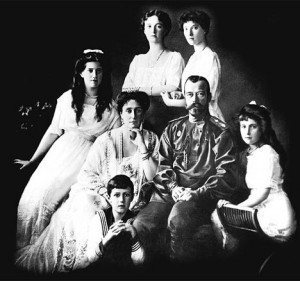 The last Tsar of Russia, with his family / dailymail.co.uk

So different frm his father, Alexander III, who was tall, confident and domineering, Nicholas was diffident before others, uncertain, and dominated first by his mother, and then by his wife Alexandra, who though German communicated with Nicholas in English, in which he was fluent, as well as speaking excellent French and German. He isolated himself from anyone outside his own small court circle, and was thus never aware of how ordinary people thought or acted. He opposed change at a time when all the other great powers were almost overcome by change, and was never ready or prepared for anything. In fact Nicholas ensured that Russia was left behind.

It is interesting to note that of all his ancestors Nicholas most hated Peter the Great, who tried to civilize, or at least to Westernize Russia – a giant task – even for Peter. If at any time decisions were demanded or required he proved helpless, saying that everything was finally in the hands of God. Nicholas himself confided to his diary that he thought himself unfit to rule: ‘I always give in, and I always agree with the last person I have seen,’ he wrote; ‘in the end I am always the fool, without will, without character.’ And yet he seemed determined to uphold the power of the throne, with himself on it.

When asked, he refused to be chairman of any committees or councils of ministers, or coordinate the work of different ministries. He would go on hunting trips, thus delaying urgent government business. He exasperated those beneath him, who found him obstinate and obtuse, though in his defence he was never a schemer or plotter. He would have considered scheming or plotting beneath him.

Leadership by the Tsar himself was essential in the government of a country the size of Russia, but Nicholas did not provide it, and prevented anyone else from providing it. It is far from impossible that even after the failed revolution of 1905, the February Revolution and that of October, Nicholas ever really understood that the Bolsheviks intended to remove him, and install their own totalitarian state, partly because he never listened to anyone if he thought they might worry him. After his abdication, which left him bewildered, his wife furious, and his five teenaged children frightened, the Bolsheviks under Lenin arranged to murder the entire royal family in July 1918, in their prison house at Ekaterinburg, because Lenin and his colleagues believed that advancing White Russian armies might release them. His mother had already been carried off to London on a British battleship, taking most of the Russian crown jewels with her.