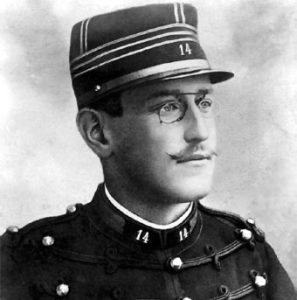 Later a new army chief was apppointed, one Colonel Picquart, who discovered in 1896 that the court martial had been a farce, and that the real spy had been Major Esterhazy, who moved in illustrious circles. Picquart was promptly sent to serve in Tunisia and in effect instructed to keep his discoveries to himself. Thus began the ‘Dreyfus Case’ – one of the most intriguing in the history of France. 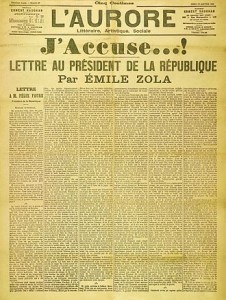 Esterhazy might have thought he would remain undiscovered but he was wrong. He was arrested and appeared at a court martial which tried and acquitted him; the Prime Minister M. Méline announced that there ‘was no Dreyfus case’ after all. But, the celebrated novelist Emile Zola wrote (in 1898) an ‘open letter’ entitled j’accuse’, which was published in a newspaper managed by M. Clemenceau. Big names in France were beginning to become involved in the case of the still exiled Alfred.

Zola directly accused the army of an openly anti-Semitic conspiracy to pervert justice, and all France talked of nothing else but l’affaire Dreyfus over their coffee and croissant. The government, however, decided to prosecute Emile Zola! Having been sentenced to a year in an ordinary prison, the novelist managed to get away to England, where he was a social lion and began speaking to important persons. Meanwhile the French government refused to re-open the case, saying that some more documents, which showed Dreyfus had been guilty, had been ‘found’. But these documents, forged by a Major Henry, were proved in 1898 to be false, and Henry committed suicide. The English people were incensed by the scandal, and the French ate less croissants, dreading what might happen next to molest their liberté and égalité.

What happened next was a re-trial; a military tribunal found Dreyfus guilty again, but with ‘extenuating circumstances’. The President could do little else but pardon Dreyfus, but he was not officially found innocent until 1906. He was then allowed to re-enter the army, which was brave of him because anti-Semitism in the army and governing circles had not been reduced by this case.

This affair could hardly be ignored by the French people, who had read nothing else but reports of it in their newspapers since 1894. Most French people considered Dreyfus guilty anyway. Only seven out of nearly sixty French daily newspapers wrote in Dreyfus’ favour, but public opinion was violently split. Old friends swore they would never speak to each other again. Nationalist, monarchist and Catholic papers were anti-Semitic anyway, convinced that there existed a plot hatched by Jews, Freemasons, Freethinkers and Protestants to discredit the army. The Right saw the case as a chance to launch a campaign in patriotic defence of the nation. The Left claimed that the Catholic Church and the army were plotting to ruin the Republic. They also shouted that injustice was being tolerated in order to save the army’s honour.

Coservative opinion was so strong that the Radicals revived anti-clericalism, and as a result the Roman Catholic Church in France was disestablished! The Dreyfus case had indeed stirred the hornets’ nest. L’affaire Dreyfus brought to an untidy end any cooperation between conservatives and moderate republicans, with the result that the ‘Opportunist’ Republic was replaced in 1899 by the ‘Radical’ Republic. Alfred Dreyfus, claiming his innocence to the last, died in 1906, the year of his re-enlistment. The writer Emile Zola, having found an even greater reading public in Britain, had died in 1902.