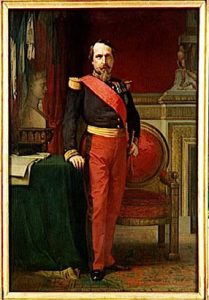 ‘Bonapartism’ was three things put under one invented name: a political movement, a system of government, and a boxed set of political principles. It supported the descendents of Napoleon Bonaparte, and dated from the election of Louis Napoleon Bonaparte as President of the 2nd Republic of France in 1848.

History tells us that the last named, who became Napoleon III, was the nephew of the Emperor himself. The DNA scientists now inform us that he probably wasn’t, at least on the part of his father. In fact the Bonaparte family have always expressed doubts about the genealogy of Napoleon III. The dilemma is to do with ‘Y’ chromosomes: the Emperor’s are supposedly ‘Corsican/Sardinian’, whereas those of Louis Napoleon Bonaparte are said to be ‘Caucasian’, which negates any consanguinity. This has recently been revealed in the newspaper Le Figaro. Previously, we believed that Napoleon III was a son of Louis Bonaparte, brother of the Emperor and King of Holland. He was married to Hortense de Beauharnais, a daughter from the first marriage of Josephine, who later married the Emperor. I count myself with the group who believe that descendency from the Emperor ceased with the death of his son (consumption or tuberculosis, 1832) at the age of twenty-one. It is recorded that Jerome Bonaparte, youngest brother of the Emperor, once publicly shouted at Napoleon III: “You have nothing of the Emperor in you at all!”

As a system of government Bonapartism consisted of weak legislature and a powerful executive, with an Emperor at its head. The powerful executive was a throw-back to the infamous ‘Committee of Public Safety’ during the French Revolution, which disallowed election of local officials, appointing them directly. It is difficult to define Bonapartism, but perhaps it was a heady cocktail of Populism with a near-lethal dose of Authoritarianism. The popular concept of Napoleon Bonaparte was as saviour of his country, uniting it, ending the Revolution and its Terror, protecting religion, and giving France stability, good order and efficient government. The French believed the Emperor had made France the strongest state in Europe, stood out as the champion of oppressed European peoples; Bonapartism therefore was a symbol of French glory, a principle of authority, and a guarantee of the success of the Revolution, such as the sale of Church lands (for the good of the people), giving persons of talent the chance to develop a career, the establishment of representative assemblies (appointed or elected?), an end to feudalism and privilege, represented by the decimation of the aristocracy.

This grand notion lasted well into the twentieth century, indeed its legacy – a strong leader will provide order and discipline – was clearly to be seen in the rise to supreme power and lengthy career of General de Gaulle.