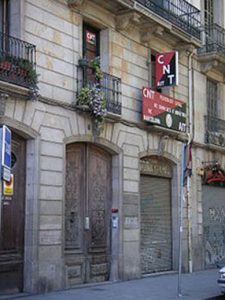 The Confederación Nacional de Trabajo was a Spanish labour/syndicalist movement, heavily involved in the Civil War of 1936/1939. The arrival of this trade union movement in 1911 helped Spanish union workers to achieve their first truly national network. It was based on existing trade unions, mainly in Cataluña, all sympathetically inclined towards anarchism. Its chief centres were in Barcelona, Saragossa (Zaragoza) and in rural, still feudal Andalucía. Following the Great War, the CNT became the biggest trade union syndicate in Spain during the economic and social crises that inevitably arose.

From 1918 to 1923 its influence in Cataluña was paramount, but employers resisted, helped by fierce and traditional backing from the army. This blocked attempts made by the government of the day to negotiate wage settlements. Strikes, go-slows, lock-outs and the widespread use of violence were orchestrated from CNT headquarters. There could be no moves towards peace, or even discussion, since the CNT had a determined policy of rejecting any state intervention in its dealings with the bosses. This stalemate resulted in ferocious urban fighting between the unions and forces gathered by the employers (1919-23).

The dictatorship of Primo de Rivera (1923-30) saw tremendous repression of the CNT, and, reacting against the severity of the armed forces and the increasing syndicalism of CNT, another union group was formed called the Federación Anarquista Ibérica (FAI) in 1927. This was a partly secrete group of activists, having great influence within the CNT, and directly aimed at preserving the traditional revolutionary context.

CNT moderates were however prepared to have talks with the Spanish Second Republic, but oddly enough the new regime preferred repression, which led them into direct confrontation with the FAI. The latter then caused the whole movement to split into factions, all wishing to promote confrontation with the new Republic; a series of pointless strikes and uprisings was organised.

With the outbreak of the Nationalist uprising of 17th/18th July 1936, the CNT played a useful if stark role in the retaining of the important port and city Barcelona for the Republic. Unfortunately for them the great centres of the labour movement Saragossa and Seville both fell to the rebel Nationalist forces; while it would be accurate to say that the anarchist industrial and rural groups during the Spanish Civil War often proved successful, the failure of anarchist soldiers to achieve military dominance without doubt undermined the Republican war effort. This was partly because of the usual warring factions existing and flowering within the labour movements: The CNT’s sovietized revolutionary concept of the war clashed with the more moderate Communists, Republican and the majority of the Socialists. Notwithstanding, four anarchists joined a Socialist cabinet in November 1936 – the only occasion until modern times when confessed anarchists entered government.

Not even the anarchists within the government managed to achieve much, though with the help of the Socialists and various other Republican groups they did crush the CNT in an uprising in Barcelona in May, 1937. It may well be that the question was being asked at the time – ‘On whose side is everybody on anyway?’ The situation puzzled Spain-watchers across Europe and in the United States. Inevitably the CNT became marginalized; the CNT-controlled council of Aragon was violently and bloodily repressed, and liquidation of the collectives was quickened. The CNT would never recover, and the Nationalists won the Civil War; the Second Republic was quashed and General Franco started his forty-year rule. Only after 1975 were the unions made legal again.