Home/World History/Charlemagne and his Grandfather
Previous Next 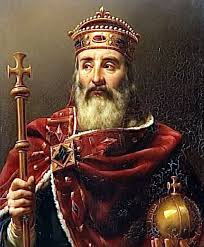 Charlemagne, a.k.a. Carlomagno, was the son of Pepin II, known as The Short, and grandson of Charles Martel. As King of the Franks he reigned at first jointly with his brother, Carloman. The latter died, however, in 771, and Charlemagne had to set about the task of ruling, and imposing that rule.

He was the first of the Emperors of the West, who eventually became Holy Roman Emperors (qv). The Franks had been weakly and impetuously governed before Charlemagne, and there were continuous invasions from the barbarian north and the Muslim south.

He waged what would turn out to be a lengthy military campaign, beginning in 772, first against the pagan Saxons, and later against the Avars in the east. Bavaria and Lombardy were subdued by him, and he was able to strengthen and support the papacy by restoring lands that had been his to the current Pope. All this led to his being crowned (as Emperor of the West) on Christmas Day, 800 by the thankful Leo III.

Being very far from just a simple soldier and statesman (like King Alfred in England q.v.) Charlemagne started schools, firstly in his own palace at Aachen; soon it became the most important place of learning in Christendom. Great scholars and teachers flocked there. He went on to found schools in the most logical and available place for them – near-empty cathedrals and monasteries throughout the Empire. It would be true to state that Charlemagne initiated a revival in scholarship whose effects were profound and enduring. This was what is called ‘The Carolingian Renaissance’.

One of the reasons why his name still rings down through the dusty centuries is that his life and achievements have been preserved through ballads and poems, some written by fellow soldiers, others by monks. The most famous of these is undoubtedly the Chanson de Roland.

Charlemagne lived from circa 742 a.d. to 814, but what he achieved in seventy-two years would have taken lesser men twice that time, even if they were capable enough to do it.

Charlemagne’s grandfather was also a Frankish king, born in 688 a.d. His name meant  ‘hammer’ in antique French. His father was called Pepin II. He occupied a position of importance called ‘Mayor of the Palace’ under Merovingian rule.

Martel was a soldier and good strategist. He occupied most of what is now Austria, and moved on to occupy and dominate both Aquitaine and Burgundy in what is now France. His greatest achievement, which has allowed him to remain a hero in France since the seventh century, was his defeat of the Muslims at a spot between between Poitiers and Tours, in the year 772. These two ancient French cities boast equestrian statues of Charles Martel, though there are similar monuments to him in many other towns. The successful battle against the Muslim forces signalled an end to their northward expansion.